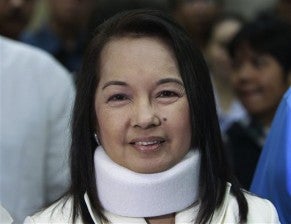 Doctors at the Veterans Memorial Medical Center (VMMC) on Wednesday  deferred the discharge from the hospital of former President and now Pampanga Rep. Gloria Macapagal-Arroyo, citing the need for further tests.

Results of the blood tests conducted on Tuesday on Arroyo showed her “serum potassium” is still low. “We have to investigate further and still do some tests (on Arroyo),” Legaspi said.

According to the VMMC director, Arroyo is not yet ready to be discharged from the medical facility. “We have to find out why the potassium remains low,” she added.

Potassium is a vital mineral for the normal functions of the heart and that of the digestive as well as the muscular systems. It is crucial to the proper function of the human body’s cells, organs, and tissues.

Arroyo has been confined at the VMMC since Thursday last week after she complained of feeling weak. Jeanette I. Andrade

Read Next
No cronies in campaign vs private armies—Roxas
EDITORS' PICK
Geek out at TOYCON 2022 powered by Smart Signature
Unemployment rate up to 6% in May
Bye bye Boris: UK PM Johnson bows out with regrets but no apologies
House energy committee chair Arroyo bats for cheap electricity
High inflation: Your P1 is now worth only 87 centavos
High-risk pregnancy: Reducing your risk is in your hands
MOST READ
Suspect in grisly killing of missing woman in Bulacan arrested
Rafael Nadal suffers ‘seven millimeter’ tear to abdomen–report
FDA probes popular Filipino noodle brand for ‘high level of ethylene oxide’
Kim Atienza’s daughter flaunts bikini body in response to critics of her ‘revealing photos’
Don't miss out on the latest news and information.