MANILA, Philippines—The Commission on Elections (Comelec) has disqualified Ako Bicol Party-list and 12 others to run in the 2013 elections.

Comelec Chairman Sixto Brillantes, during a press conference aired over Radyo Inquirer, said Ako-Bicol partylist is currently being represented by three nominees in Congress. He added that it was the topnotcher among the party-list groups in the 2010 elections, garnering more than 1.52 million votes. 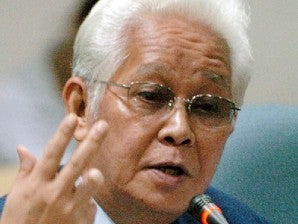 Brillantes said the group’s incumbent lawmakers will be allowed to finish their terms until June 30 next year but they can no longer run in the 2013 polls.

When pressed by reporters on why the group was disqualified, Brillantes explained that they considered a lot of factors but the strongest one was that it was not “representing any particular sector.”

“The strongest is that they are a duly accredited political party but they are applying to run under the party-list system without representing any particular sector,” Brillantes said.

“They did not file any special petition to run under the 2013 elections. It does not mean that if you’re a political party you can just run under the party list system without filing a separate petition,” he added.

He said the vote against Ako Bicol was a unanimous 6-0 vote.

He added their decision was final and that Ako Bicol could go to the Supreme Court to question the decision.

He announced the 12 other party-lists disqualified were:

With a report from Jocelyn Uy, Philippine Daily Inquirer