What Went Before: The proposed MOA-AD 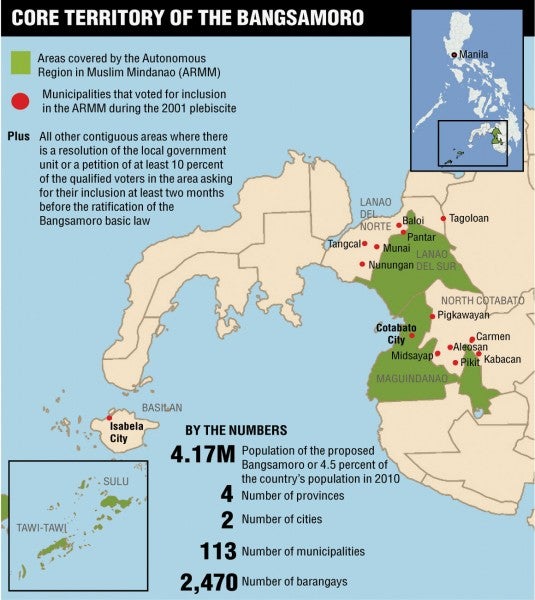 Under the proposed memorandum of agreement on ancestral domain (MOA-AD), the planned homeland also referred to as the Bangsamoro Juridical Entity (BJE) was to include the Autonomous Region in Muslim Mindanao (Sulu, Maguindanao, Lanao del Sur, Tawi-Tawi, Basilan and Marawi City); six municipalities in Lanao del Norte; hundreds of villages in the provinces of Sultan Kudarat, Lanao del Norte and North Cotabato, which voted in 2001 to become part of the ARMM; and parts of Palawan.

It was to have its own “basic law,” police and internal security force, and system of banking and finance, civil service, education and legislative and electoral institutions, as well as full authority to develop and dispose of minerals and other natural resources.

The agreement was scheduled to be signed on Aug. 5 in Kuala Lumpur (the Malaysian government brokered the talks that led to the agreement).

But the agreement met with strong public opposition, with groups claiming that the proposed Bangsamoro homeland could lead to the formation of an independent state. Some officials, lawmakers and interest groups took the issue to the Supreme Court.

On Aug. 4, the Supreme Court issued a temporary restraining order stopping the signing of the agreement.

On Oct. 14, the Supreme Court, voting 8-7, declared the MOA-AD unconstitutional and illegal, describing the process that led to its crafting as “whimsical, capricious, oppressive, arbitrary and despotic.”

The Supreme Court affirmed its decision to reject the deal on Nov. 11.

On Dec. 5, the peace talks resumed in Kuala Lumpur. At the end of the three-day talks, both parties agreed on 11 basic points that largely centered on defining “genuine autonomy” for the Moro people. They also agreed to extend the mandate of international ceasefire monitors until 2013 despite recent clashes.

On Jan. 9, 2012, the panels met in Kuala Lumpur and tackled details of the autonomy proposal.

On Feb. 13, in another round of the talks, Iqbal said the Aquino administration had agreed to a parliamentary form of government for the Moro people. He said the negotiations were moving forward, although there were still disagreements on several issues like wealth-sharing, territory and power-sharing.

On March 19, both panels met again in Kuala Lumpur, but Marvic Leonen, chief government negotiator, said both parties were approaching a stalemate.