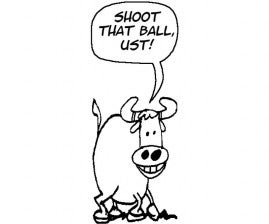 It seems their quarrel has gone beyond basketball. Now they’re also quarreling about the reproductive health (RH) bill pending in Congress.

An editorial in the Sept. 30 issue of The Varsitarian, the student publication of the University of Santo Tomas (UST), slammed professors of Ateneo de Manila University and De La Salle University for supporting the controversial measure, calling them “intellectual pretenders and interlopers.”

The editorial was titled “RH bill, Ateneo, and La Salle: Of Lemons and Cowards.” The quarrel went viral in social media on Monday.

The Philippine Daily Inquirer called the Ateneo University Communication and Public Relations Office for comment, but a female official who refused to give her name said: “We don’t want to make a comment.”

The Varsitarian editorial said that since Catholic universities existed for evangelical purposes, the 192 Ateneo and 45 La Salle professors who declared support for the RH bill should resign to show conviction.

“But alas, it seems intellectual honesty and moral conviction are in such short supply in Katipunan, Quezon City, and Taft Avenue, Manila,” it said.

The editorial also criticized the Ateneo and La Salle administrations for treating their professors with “kid gloves.”

“What’s more appalling is that the Jesuit and Christian Brother administrations of Ateneo and La Salle didn’t reprimand their faculty members for openly defying the bishops,” the editorial said.

The editorial quoted a letter from UST secretary general Fr. Winston Cabading to the vice rector for student affairs and research reaffirming the university’s support for the Church on matters of faith and morals.

Cabading said professors should not identify themselves as faculty members of a Catholic university if they wanted to speak on anything contrary to the position of the Church.

It also said: “It’s quite shocking that Ateneo and La Salle professors should harbor naive and misguided thinking about health and social problems.”

It said that, in contrast, “UST, which has the oldest and the foremost school of medicine in the Philippines and Southeast Asia, has always warned about the dangerous side effects of contraceptives.”

“UST and her physicians surely know whereof they speak. They’re scientists and experts, unlike the Ateneo and La Salle professors who are intellectual pretenders and interlopers!”

A Sept. 15 editorial in The Guidon, an Ateneo student publication, has also circulated in the social media. The Guidon said  RH debate had been “marked by harsh, dismissive language and rhetorical barbs on both sides.”

“Time and again, statistics have been disregarded and research has been misrepresented—not to mention plagiarized—in the effort to fight the bill. Ignorant and condemnatory statements have been made, invoking a rigid kind of Catholic theologizing completely out of touch with temporal realities,” it added.

The Guidon editorial said it was unsettling how some members of the Catholic Bishops’ Conference of the Philippines “seem to believe that universities are merely channels of indoctrination rather than institutions that foster intelligent discourse.”

It called for the passage of the RH bill, saying the measure “favors education over misinformation. Its thrust for education ultimately empowers women and families.”

User @mashi_carigms tweeted: “To every person who found the Varsitarian article derogatory & offensive, as a Thomasian, I apologize for the blatant display of disrespect.”

“I respect that fact that they are bound to follow where the church stands but bashing schools is just too low,” tweeted @FreeMindz.

What Aquinas would do

On the Varsitarian’s official Facebook page, Phillip Rodriguez commented: “The article is plain cowardice! A bullying in print whose intention is just to instigate school wars! We teach students to be kind, not to bully others.”

Nastasia L. Tysmans, who teaches at Ateneo de Manila University, wrote in her blog: “For a university that takes after Thomas Aquinas, I really hope you speak only for a few in  the school you represent because these ideas of yours to stick to dogma and tradition are far from what Aquinas would have ventured had he been alive today. He would ponder the question and think. He would write so others might also speak and most of all, as a doctor of the church he would opt to heal and not violently use his faith to deprive others of what is rightfully theirs.”

Some poked fun at the Varsitarian, like Sharwin Tee, @chefsharwin: “Maybe disgruntled Atenean and Lasallians can show their unhappiness peacefully and send tinolang manok (neck part only) to Varsitarian editors.”

Other netizens said the only good thing about the Varsitarian editorial was  it renewed the discussion on the RH bill. With a report from Fe Zamora