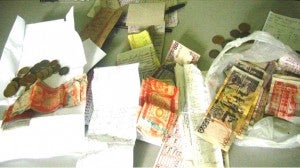 The idea, which is now being consulted with the Department of Justice, is among the innovations Roxas is considering to finally put an end to the numbers racket “jueteng.”

“Millions of money raked in from bets would enter our monetary system through bank branches, savings and loans, etc,” he said.

He said the use of AMLC will help identify the jueteng lords and protectors who deposited huge amounts of money in banks.

Senator Panfilo Lacson earlier alleged that regional police directors may be getting P2 million to P3 million a month from illegal numbers game operators, while police provincial directors could be receiving roughly P1.5 million monthly for the protection of their illegal business.

Commenting on the issue, PNP chief, Director General Nicanor Bartolome said he has discussed the matter with regional directors, adding that he had always been clear on his “no take policy.”

During Roxas’ first command conference with top officials of PNP, he said its 17 regional directors were made to make a presentation in answering several questions.

The first question was, “What’s working positively in your area? why?;” second: What’s not working? why?;” third, “complete the sentence: ‘I wish’; and fourth, “What do you think is deliverable by the end of this year, and in the middle, till the end of next year?”

Roxas said he made this seemingly “diagnostic session” in his first meeting with top police officials to determine the overall situation in their respective areas of jurisdiction.

“Mahirap na pumapasya na kulang-kulang o mali ang impormasyon,” he said, adding that this conference will determine what kind of support to give each regional police office.

The conference started around 9 a.m. and ended around 3 p.m.

A source earlier said several officials were reprimanded by secretary during the nearly six hour conference, but the PNP, through its spokesman, Chief Superintendent Generoso Cerbo Jr. said both DILG and PNP “strongly denied that such thing ever happened.”

He said attending officials were given “guidance and instructions.”

“Definitely no one was reprimanded.’” Cerbo said.