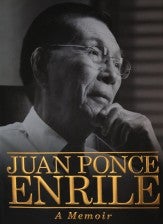 Did he or did he not fake his ambush 40 years ago?

In response to numerous requests from our readers, the Inquirer did a fact-check on a controversial claim that the Senate president made in his newly published book, “Juan Ponce Enrile: A Memoir.”

Enrile, the martial law administrator of the dictator Ferdinand Marcos, said in his book that the ambush on his convoy on the night of Sept. 22, 1972, was not staged—a turnaround from what the then defense secretary disclosed during a historic press conference on Feb. 23, 1986, when he and then Lt. Gen. Fidel V. Ramos announced their revolt against Marcos.

In other interviews with certain foreign correspondents, Enrile was also reported as saying that the ambush—one of the reasons cited by then President Marcos to justify his imposition of martial law—was faked.

So, which is which?

In his book, Enrile said that on Sept. 22, 1972, his three-vehicle convoy was driving through Wack Wack subdivision on his way home to Dasmariñas Village from Camp Aguinaldo where he had just briefed top military officers on the implementation of martial law.

“A speeding car rushed and passed the escort car where I was riding. Suddenly, it opened several bursts of gunfire toward my car and sped away. The attack was so sudden that it caught everyone by surprise. No one in the convoy was able to fire back,” Enrile said in the book.

Enrile’s convoy left the bullet-riddled car and returned to Camp Aquinaldo where he reported the incident to Marcos. The soon-to-be-dictator, according to Enrile’s account, uttered some expletives: “Lintik ang mga ’yan!” (Damn those fools!).

In his book, Enrile said his political opponents were the ones who spread the word after the 1986 People Power Revolution that the ambush was faked to justify the imposition of martial law.

“This is a lie that has gone around for far too long such that it has acquired acceptance as the truth … . This accusation is ridiculous and preposterous,” Enrile said in his book. “Whether I was ambushed or not, martial law in the country was already an irreversible fact. So what was the need to fake my own ambush?”

The banner headline of the Philippine Daily Inquirer’s front page published on Feb. 23, 1986 read: “Enrile, Ramos lead ‘revolt’ against FM.” One of the dropheads accompanying the headline read: “1972 ambush fake—Enrile.”

In its research, the Inquirer also came upon several journalists who said that Enrile himself had admitted not only during the Feb. 22, 1986, press conference but also in several interviews that the ambush was fake.

In his 1988 book, “Waltzing with a Dictator,” New York Times reporter Raymond Bonner wrote that while Enrile’s wife, Cristina, said that God had saved her husband, “God had had nothing to do with it. Marcos and Enrile had staged the  ‘ambush,’ as the final justification for martial law.”

Bonner said he had two long interviews with Enrile in December 1985. “He was emphatic that the attack on him had not been staged, but in February 1986, after he had broken with Marcos and led the revolt that ousted the Philippine president, Enrile admitted that the attack on his car had been faked,” Bonner wrote.

In her 1989 book, “Impossible Dream,” Time correspondent Sandra Burton wrote: “Seasoned observers believed from the start that the attack had been staged. Years later, as he was in the midst of his own revolt from the Marcos regime, Enrile would confirm those suspicions.”

Pulitzer Prize-winning journalist Katherine Ellison also said that Enrile himself admitted that the ambush was fake.

In her 1988 book, “Imelda,” Ellison wrote: “(Enrile) revealed that he had narrowly escaped injury in a spectacular ambush of his car—an event he conceded in 1986 had been staged.”

In his 1986 book, “The Quartet of the Tiger Moon,” National Artist Nick Joaquin wrote about the people’s reaction to the “confession” of a certain Capt. Ricardo Morales about an alleged plot to attack Malacañang and kill Marcos:

“The ‘confession’ sounded hollow to people who had just heard Enrile reveal that the 1972 attempt on his life was staged to give Mr. Marcos an excuse to declare martial law. People sneered that Marcos was so used to faking (fake feats, fake medals, fake literary works, fake health) that he would fake even his own assassination and death.”

Oscar Lopez, who lived in Wack Wack where the ambush supposedly took place, narrated his memory of that fateful night in the 2000 book, “Phoenix: The Saga of the Lopez Family.”

“After the shooting died down, I went out. I took a peek at what was happening outside my fence, and I saw this car riddled with bullets. Nobody was hurt; there was no blood. The car was empty,” Lopez said in the book.

The car was Enrile’s. At the time, Lopez did not know who owned the car, but he did know “it had been no ambush.”

“Our driver happened to be bringing our car into our driveway at around that time, so he saw the whole thing. He told me that there was this car that came by and stopped beside a Meralco post. Some people started riddling it with bullets to make it look like it was ambushed. But nobody got killed or anything like that. My driver saw this. He was describing it to me,” Lopez said.

Lopez said he decided to call the Manila Chronicle, which was owned then by his family. “My first move was to call up the Chronicle. I told the people that there had been some shooting here in Wack Wack. They sent somebody over, but he was told that Enrile was supposedly ambushed. But I knew even then that the attack had been staged. Enrile admitted that it was all staged afterwards. But Marcos used this incident as a pretext to declare martial law.”

In his column posted on the Sun.Star Cebu website, lawyer Pachico Seares recalled: “In February 1986, while barricading with then PC chief Fidel Ramos in Camp Aguinaldo, after President Ferdinand Marcos learned they were plotting against him, JPE told the nation the ambush was staged. On radio, he confessed that Marcos ordered the bogus attack and called it the ‘final act’ by his enemies and, as the President said 14 years earlier, the ‘last straw’ that made him declare martial law.”

Sources: Inquirer Archives; “Impossible Dream” by Sandra Burton; “Waltzing with a Dictator” by Raymond Bonner; “Imelda” by Katherine Ellison; “Phoenix: The Saga of the Lopez Family” by Raul Rodrigo; “The Quartet of the Tiger Moon” by Quijano de Manila; Sunstar.com.ph