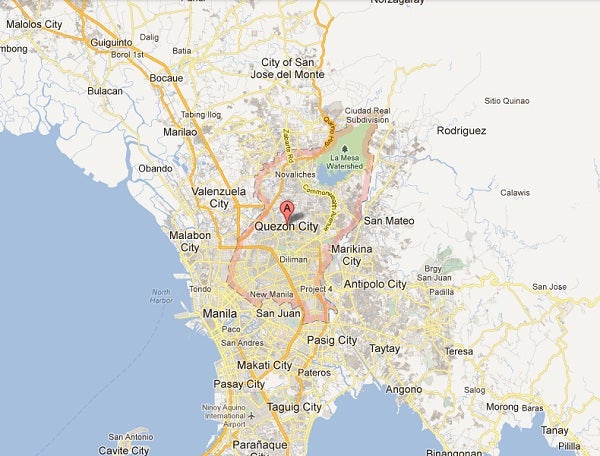 MANILA, Philippines—State authorities on Saturday arrested a top leader of the New People’s Army (NPA) who had received military training in Libya and had a P5.6 million bounty on his head.

A statement from the military’s Southern Luzon Command said alleged NPA leader Benjamin Mendoza and three companions were arrested shortly after midnight outside a hideout in Quezon City.

The military said 61-year-old Mendoza (aka Lorens/Kenji/Dave) was a member of the Communist Party of the Philippines’ Central Committee and secretary of the Southern Tagalog Regional Party Committee (STRPC).

Mendoza has two arrest warrants issued against him by the Regional Trial Court in Lucena City for rebellion.

Also arrested were Mendoza’s companion Josephine Mendoza, aka Luisa, said to be an executive committee member of the STRPC, and two unidentified members.

They were arrested at 12:15 a.m. by joint elements of the 2nd Infantry Division, Philippine Army, other AFP units and the Philippine National Police (PNP) along Aurora Boulevard, Quezon City.

Mendoza was said to have taken a course in commando operations, heavy weapon operations, bomb making and sniping in Libya from 1981 to 1982. Two years later, he became the NPA commanding officer in Oriental Mindoro. He went on to higher positions in the rebels’ Southern Tagalog front.

According to Solcom, Mendoza held on to his leadership post despite having been meted “Lifetime Disciplinary Action” by the rebel leadership for his extensive involvement in “Operation Missing Link (OPLM),” the rebels’ attempt to cleanse its ranks of “deep penetration agents of the military in their Laguna and Quezon. The rebel organization’s OPLM is said to have resulted in the torture and death of hundreds of rebel fighters.

The military statement said Mendoza was also known to have “led the most number of successful NPA operations with the least numbers of NPA casualties in 1991.”

Mendoza carried the alias “Ka Even” in 1975, when he led the Samahan Demokratiko ng Kabataan (SDK) in the National Capital Region (NCR), a youth organization outlawed after the declaration of martial law in 1972. Mendoza joined the clandestine Communist Party of the Philippines and later became the commanding officer of the Crispin Tagamolila Command, in charge of the central committee security. He was assigned to the Southern Tagalog region, his work focusing on ideological and political organizational tasks, the military report added.