But exactly from where is Blessed Pedro? | Inquirer News
Close
menu
search

But exactly from where is Blessed Pedro? 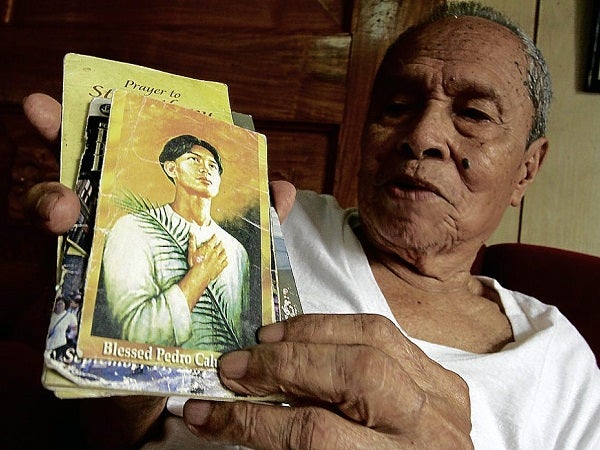 CEBU CITY—Jaime Calungsod turned 85 years old on Aug. 28, and he feels that he owes his life to his ancestor, Blessed Pedro Calungsod.

Jaime, a resident of Barangay Poblacion in Ginatilan town, southwest of Cebu City, was diagnosed with prostate cancer in 1986. Although he has sought medical treatment, the Army reserve officer has also turned to Blessed Pedro for intercession.

“I kept on praying. Blessed Pedro is from Cebu. I’m related to him,” Jaime said.

His prayers appeared to have been answered.

Jaime was cured of his illness according to his physician in the United States. “I was a recipient of a miracle,” he said.

He will be attending the Oct. 21 canonization of Blessed Pedro in Rome, Italy. “I’m very happy. I now have a relative who will be proclaimed a saint. We will be going to Rome to represent the Calungsod family in Ginatilan,” he said.

Jaime, who has six children, has been a devotee of Blessed Pedro even before the Visayan martyr was declared “blessed” in 2000.

“Every day before going to bed, I pray to Blessed Pedro. I’ve been asking for good health in my family,” he said. He showed the Inquirer a prayer guide, which he uses in seeking the aid of the soon-to-be saint.

He was interviewed by Msgr. Ildebrando Leyson, vice postulator of the cause of sainthood of Blessed Pedro, in the early 1990s. It is not known, however, if his case is among the miracles attributed to Blessed Pedro that pushed for his canonization.

Jaime is not the only person in Cebu who claims to be a relative of the martyr. Cebu Archbishop Jose Palma has said a number of Cebuanos—all claiming to be relatives—had sought his endorsement for visa applications to the Italian Embassy so they could attend the canonization rites, and so far, he has signed more than 3,000 letters of endorsement.

But exactly from where is Blessed Pedro? Even the archdiocese is not certain of the exact place of origin.

Old documents written by Calungsod’s companion missionaries identify Calungsod as an “indio Bisaya” or a Visayan native. Church records say he was born in 1654 in the Diocese of Cebu, which at that time also included islands of Panay and Mindanao, as well as the Pacific island of Guam.

There are no existing documents, like a baptismal record, that could serve as bases for identifying Blessed Pedro’s origin, according to Leyson.

Calungsod is a Cebuano surname, he said, and is nowhere to be found in the two other Visayan languages—Hiligaynon and Waray.

“The term ‘lungsod’ for town is Cebuano, while in Hiligaynon it is ‘banwa’ and in Waray, ‘bongto.’ Nevertheless, we cannot surely say that Blessed Pedro was a Cebuano since there are Calungsod families in Panay and Leyte,” Leyson said in his catechetical primer on the life, martyrdom and glorification of Blessed Pedro.

Blessed Pedro may well be from Ginatilan, a coastal municipality 135 kilometers southwest of Cebu City and considered then a very remote place in Cebu.

“If he came from there, it is not surprising that his exact provenance in the Visayas was somehow unknown, especially to the Jesuits who had no mission station there,” Leyson said.

But how did Blessed Pedro get in contact with the Jesuit missionaries? Leyson said the nearest Jesuit mission station was in Tanay in eastern Negros, across the channel from Ginatilan.

“It is interesting to note that the first account we have about Pedro was written 24 days after his martyrdom by his companion missionary in Guam, Fr. Francisco Solano, who had worked in Negros since 1665 when Pedro would have been about 10 years old,” he said.

Blessed Pedro, a teenager from the Visayas, was among the first to serve on a mission organized by Fr. Diego de San Vitores to the Ladrones Islands in the Western Pacific island of Marianas on June 16, 1668. Trained by the Jesuits, Pedro mastered catechism and learned how to read, write and deliver discourses in Visayan, Spanish and Chamorro.

On April 2, 1672, he and Fr. Diego were speared with a cutlass by two villagers in Tumhon, Guam, for catechizing and baptizing the natives.

Leyson said the surname Calungsod is variedly spelled in the manuscripts of his Spanish companions and contemporaries as “Calonsor, Calongsor, Calansor and Calangsor.” It is of Visayan origin, derived from “lungsod,” which means town or citizenry.

The Spaniards may have written the surname according to how they could pronounce it—with perhaps some difficulty—in enunciating the “ng” and the terminal “d,” he said.

“Even today, when lungsod is inflected, the terminal ‘d’ is alternated with an ‘r.’ For example, ‘kalungsoran’ (towns) to ‘lungsoranon’ (town citizens), ‘bukid’ (mountain) to ‘kabukiran’ (mountains), ‘tubud’ (spring) to ‘tuburan’ (source, springs),” he said.

Leyson said the Calungsod families are densely found in Ginatilan, the towns of Hinunangan and Hinundayan in southern Leyte, and in the district of Molo in Iloilo City.

Jaime said the other Calungsods in Ginatilan have migrated to other places like Midsayap in Cotabato, Leyte, Bohol and Iloilo.

“But the origin of the Calungsods is Cebu, specifically in Ginatilan,” he said.