What Went Before: Arroyo’s plunder case 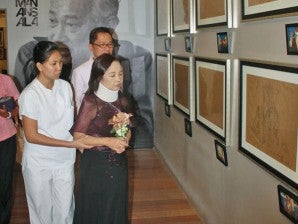 FRAIL Former President Gloria Macapagal-Arroyo is helped by a nurse as she views an exhibit of the works of the late Pampango artist Juan Flores at Holy Angel University in Angeles City on Sept. 29. The former President is confined at Veterans Memorial Medical Center in Quezon City. TONETTE T. OREJAS/INQUIRER CENTRAL LUZON

The complaint for plunder, graft and malversation was filed in the Office of the Ombudsman on July 12, 2011, against former President Gloria Macapagal-Arroyo and former Philippine Charity Sweepstakes Office (PCSO) General Manager Rosario Uriarte in connection with the alleged misuse of over P325 million in intelligence funds of the agency.

The complaint, filed by Bayan Muna Representatives Teodoro Casiño and Neri Colmenares, came as the Senate investigated the disbursements of the PCSO intelligence funds.

Testifying before the blue ribbon committee, Uriarte said Arroyo signed PCSO board resolutions in 2008-2010 approving the allocation of hundreds of millions of pesos in charity funds for intelligence operations. Uriarte said the agency used the funds for relief operations and for blood money for the families of those killed by overseas Filipino workers.

The Senate blue ribbon committee later recommended that Arroyo and Uriarte be charged with plunder and technical malversation, noting that the use of the confidential and intelligence funds was “grossly excessive and disproportionate to the claimed reasons for their release.”

In their complaint, the lawmakers alleged that Arroyo conspired with Uriarte to divert funds from PCSO’s operating budget to the intelligence fund for things other than intelligence work. The said scheme spared the money from regular auditing, the lawmakers contended.

On July 16, 2012, the Office of the Ombudsman charged Arroyo with plunder in the Sandiganbayan in relation to the misuse of funds.

The Office of the Ombudsman accused the officials of conspiring to directly or indirectly accumulate P365.99 million in ill-gotten wealth from the agency from January 2008 to June 2010. It said the accused allegedly converted, misused and illegally transferred the funds for their own use “in the guise of fictitious expenditures.”

The antigraft court however directed the Ombudsman to give due course to Arroyo’s motion for reconsideration of the Ombudsman’s July 16 decision to file the plunder case.

In its ruling, the Sandiganbayan upheld the argument of Arroyo’s defense lawyers that the preliminary investigation was incomplete because the charge was filed in court before they received their copies of the Ombudsman’s decision.

Arroyo’s lawyers said the former President received her copy of the Ombudsman ruling on July 20 and that they filed a motion for reconsideration within the allowed five-day period. Inquirer Research