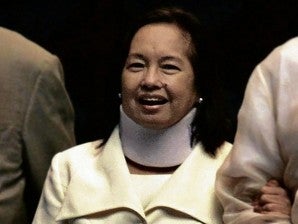 MANILA, Philippines–Former president and now Pampanga Representative Gloria Macapagal-Arroyo was once again placed under hospital arrest Thursday after she was served an arrest warrant issued by the Sandiganbayan for a plunder charge in connection to an alleged misuse of the Philippine Charity Sweepstakes Office intelligence funds.

She was later found to have been suffering from dehydration.

“She [Arroyo] is presently confined at the presidential suite of VMMC [and] she will remain in confinement while undergoing medical treatment,” Coronel told reporters, adding that they are set to return the arrest warrant to Sandiganbayan First Division, also to inform the court of Arroyo’s physical health condition.

Coronel said it would be the discretion of the court if it would be necessary to transfer Arroyo to a regular prison, or to another government establishment.

But as of the moment, a transfer of Arroyo “is not feasible” after she was observed to be suffering from hypertension and hydration by VMMC doctors and PNP medical officers, he said.

“When we arrived in the hospital, she was lying on the bed and [there was] an IV [dextrose] attached to her . . . the former president will be confined and detained here this night,” he said.

Sandiganbayan First Division ordered the arrest of Arroyo and nine others for allegedly misusing PCSO funds amounting to P365 million.

Earlier in the day, radio reports said Arroyo’s lawyers in a motion questioned the arrest, which the Sandiganbayan denied due to lack of merit.

“As to the other accused, manhunt operations are already being conducted,” the police official said, adding that authorities are also working on the surrender feelers from some of the accused personalities.

Radio reports quoted Coronel as saying that five teams of arresting officers have already been deployed for the remaining respondents who are inside Metro Manila, while another team was organized to arrest Plaras from Legaspi City.

Booking procedures, fingerprints, photographs, and other necessary procedures in an arrest were all done inside Arroyo’s room.

Only Arroyo’s lawyer and her spokesperson Elena Bautista Horn were inside the room during the serving of arrest warrant, he said.