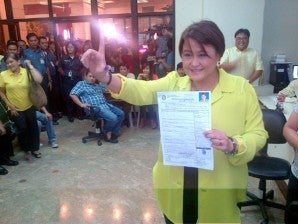 Madrigal is running for senator under the ruling Liberal Party (LP). She previously ran for president in the 2010 elections but lost.

She was accompanied to the Comelec office in Manila by her husband, friends and supporters.