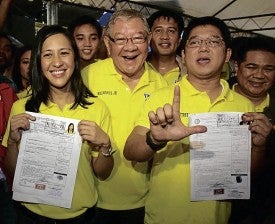 With no serious candidates posing a threat to their bid to run for another term, three incumbent mayors—Herbert Bautista of Quezon City, Jejomar Erwin “Junjun” Binay Jr. of Makati City and Benhur Abalos of Mandaluyong City—seem poised to win handily in next year’s polls.

One of them, however, is not about to take things for granted.

“Anybody is a threat,” Bautista said Wednesday after he filed his certificate of candidacy (COC) in the Commission on Elections (Comelec) local office along with members of his slate who are running under the Liberal Party ticket.

According to him, he has learned never to underestimate his opponents who, as of Wednesday, numbered just one—67-year-old bachelor Romeo Acebedo, who ran against then Quezon City Mayor Feliciano “Sonny” Belmonte Jr. in 2007.

Acebedo was also the first mayoral bet to formalize his intention to run when he went to the Comelec office on Monday, the first day for the filing of COCs.

According to Bautista, he respects everyone’s right to seek public office and will not underestimate their ability to get votes.

Asked if he had heard of former Senator Robert Jaworski Sr.’s plan to seek the mayoralty, Bautista said he hoped the basketball legend would not do so because he did not want the city divided by politics.

There have been reports that Jaworski will run for mayor with Representative Vicente “Bingbong” Crisologo as his vice mayor.

Bautista, on the other hand, is running with incumbent Vice Mayor Josefina Belmonte, Belmonte’s daughter.

In Makati, a heavy downpour failed to dampen the festive atmosphere at the local Comelec office when Junjun Binay led other United Nationalist Alliance (UNA) candidates in filing their COCs.

Lending him support were his father, Vice President Jejomar Binay; mother, Elenita; a band; and yellow shirt-wearing supporters who came with their umbrellas.

With the younger Binay were his running mate Marjorie A. de Veyra, 16 candidates seeking seats in the city council, his sister Rep. Mar-Len Abigail Binay-Campos (District 2) who, with Rep. Monique Yasmin Lagdameo (District 1), is running for reelection.

Asked if he knew who he would be going up against for the mayor’s seat, Junjun Binay said: “Let’s wait until Friday. We don’t have any information [about that yet].”

As for accusations that they were perpetuating a political dynasty in the city, he replied: “This is a dynasty of service. If the Makati residents didn’t want us, we wouldn’t have won in the [last] elections.”

In Mandaluyong, Abalos and his running mate, incumbent Councilor Edward Bartolome, filed their COCs in the local Comelec office following a Mass at a nearby church in the afternoon.

With Abalos was his 78-year-old father, former Comelec Chair Benjamin Abalos, who is out on bail while hearings on the electoral sabotage charges against him are ongoing in the Pasay Regional Trial Court.

Sources told the Inquirer that the younger Abalos could be pitted against incumbent Vice Mayor Danny de Guzman, who is reportedly running with Bebot Domingo, son of former city Mayor Ernesto Domingo. Both, however, have yet to file their COCs.

Familiar names but less familiar faces will be pitted against each other next year in Parañaque City with Councilor Florencio “Benjo” Bernabe III being groomed to succeed his father, Mayor Florencio “Jun” Bernabe.

Benjo Bernabe, who filed his COC on Monday, has taken for his running mate, Jose Enrico Golez, son of incumbent Rep. Roilo Golez.

They will be up against incumbent Rep. Edwin Olivarez and Councilor Edwin Benzon.

Marquez, however, is not the only show-biz celebrity running for office in the city. As of Wednesday, the list of candidates for councilor included Marquez’s ex-wife Alma Moreno; Ryan Yllana, TV host Anjo Yllana’s brother; singer Roselle Nava and former basketball player Jason Webb.

The younger Echiverri’s supporters, who described him as a capable leader who would continue his father’s programs, enjoyed a free mini-concert in front of the Caloocan City Hall afterward.

In an unexpected move, incumbent Vice Mayor Edgar “Egay” Erice has withdrawn his bid for the mayor’s seat.

“I’m not running for any position anymore, but I would continue with my advocacy,” Erice told the Inquirer in an interview.

When pressed for the reason behind his decision, Erice only answered, “I would like to reserve further comment for another day. I have to consult a lot of people first before I can say anything more.”

Rumors about Erice’s withdrawal broke as early as Tuesday evening but he formally announced it to community leaders who were supporting him only Wednesday afternoon in a hastily called meeting.

“They were sad, especially because they knew I would really stand up for the daang matuwid (straight path),” he said, referring to the Aquino administration’s slogan.

“However, I don’t want to go on a battle we can’t win or which will go nowhere,” Erice added.

Erice, who was supposed to file his COC later this week, was reportedly counting on being chosen as the Liberal Party’s candidate for vice mayor. However, there was talk that the party chose to back the younger Echiverri whose father is locked in a political dispute with Erice.—With Kristine Felisse Mangunay, Jaymee T. Gamil and Nathaniel R. Melican