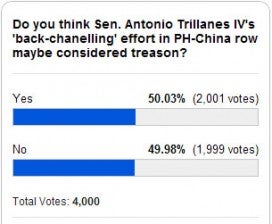 MANILA, Philippines—Answers to the question posed by the INQUIRER.net regarding Senator Antonio Trillanes IV’s back-channelling role in the Philippines-China territorial row were almost equally shared between “Yes” and “No.”

Last month the Philippine Daily Inquirer reported that Trillanes had worked as a backroom negotiator, working independently for President Aquino in Beijing.

Foreign Secretary Albert del Rosario, in an interview with the PDI, complained that his efforts to resolve the lingering standoff with China over disputed territories in the West Philippine Sea were being torpedoed by Trillanes as backroom negotiator.

Although Del Rosario did not name the supposed spoiler, Trillanes told the Inquirer that he felt alluded to.

In a verbal tussle at the Senate with Trillanes on the latter’s back-channelling effort, Senate President Juan Ponce Enrile accused the young senator of working for China, which was tantamount to treason.—Rick Alberto, INQUIRER.net