SC: No TRO on cyberlaw 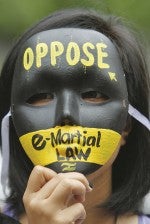 CYBER PEOPLE POWER A masked protester joins a big rally by different organizations composed of activists, journalists, netizens and bloggers in denouncing the online libel provision of the cybercrime law during a silent protest outside the Supreme Court on the eve of the law’s implementation. RAFFY LERMA

Netizens beware. Republic Act No. 10175 or the Cybercrime Prevention Act, which among other things provides for blocking certain computer data and for longer prison terms for those found to have committed libel, is now in effect.

The cybercrime law becomes effective starting Wednesday because the Supreme Court has not issued a temporary restraining order  sought by various individuals and groups opposed to the new law.

“The Supreme Court did not issue a TRO in the Cybercrime Prevention Act of 2012 petitions which are up for further study,” said Ma. Victoria Gleoresty Guerra, acting chief of the high tribunal’s public information office.

The justices held their regular full court session Tuesday with 10 justices in attendance. Guerra said four justices were absent—Diosdado Peralta, Lucas Bersamin and Mariano del Castillo were attending a conference in Croatia, while Roberto Abad was on personal leave.

Justice Secretary Leila de Lima said RA 10175 would take effect even if it did not have implementing rules and regulations (IRR).

“Effectivity of that law is not conditioned upon the adoption of the IRR and the setting up of the Office of Cybercrime. No legal impediment for the law’s implementation, given the absence of a TRO or injunction,” she said in a text message to reporters.

Seven petitions have been filed in the high court questioning the constitutionality of several provisions of the new law and asking it to issue a TRO.

The law raises to more than 14 years in prison the cumulative penalties for a single act of online libel. It also guarantees imprisonment as the accused is ineligible for probation.

Fr. Joaquin Bernas, a lawyer, described as “most disturbing to many”  Section 19, which says: “When  computer data [are] prima facie  is found to be in violation of the provisions of this Act, the DOJ [Department of Justice] shall issue an order to restrict or block access to such computer data.”

Guingona said he was disappointed that the Supreme Court deferred the hearing of the petitions.

“I respectfully ask the high tribunal to resolve the issues and act on the petitions immediately to prevent further harm to our cyberusers. The implementation of the law will take back our citizens to the Dark Ages where freedom of speech and expression was not recognized,” he said.

Guingona said he would continue to be with the citizens and Internet users in “this fight to ask the Supreme Court for a temporary restraining order and to finally repeal some vague and oppressive provisions of the newly enacted law.”

“Let me say this once again, the state has no right to gag its citizens and convict them for expressing their thoughts. The Philippines is a democratic country,” Guingona said.

“The Filipinos should never be left to cower on the sidelines—their thoughts and voices should not be shackled by fear and intimidation. The people should not be afraid of its own government,” he added.

Palatino also decried the Supreme Court’s inaction on the petitions. “To that we say, absence makes the Internet grow darker,” he said.

He was referring to online protests against the law, which consisted of blacking out websites and profile pictures in social networking sites.

As the justices met, about 100 members of the Philippine Internet Freedom Alliance (Pifa), composed of different organizations of netizens and bloggers, staged a “silent protest” in front of the Supreme Court building on Padre Faura Street in Manila to show their opposition to the law and to call on the justices to issue a TRO.

With their mouths covered with black electrical tapes, the protesters carried plain black placards and a huge streamer printed with the words, “Stop Cyber Martial Law.”

Ayeen Karunungan, council member of Dakila-Philippine Collective for Modern Heroism, said it was ironic that while the country was commemorating the 40th year after the declaration of martial law and crying “Never again!” the cybercrime law was signed.

“Real democracy allows the right to free speech as it is fundamental in people’s participation in governance. Enacting the law is the death of that right,” Karunungan said.

Pifa has called on people who could not attend street protests to do “an online blackout” of their websites and social media pages.

On Facebook, some members have replaced their profile pictures with black screens and logos protesting the cybercrime law. Others posted “shaded” comments to demonstrate their fears of possible government censorship of online activities.

As online protests intensified, lawmakers moved to amend the cybercrime law on the eve of its implementation.

Sen. Francis Escudero, who earlier admitted to missing the inclusion of libel in the new law when he voted in its favor, on Tuesday filed a bill seeking to repeal the provision.

“[With] today’s modern technology, the crime of libel does not only prove antiquated but to the contrary even overarching as a state tool to restrain freedom of speech,” Escudero said in his explanatory note in Senate Bill No. 3288.

Escudero said this was evident in the passage of the cybercrime law which broadened the coverage of the crime of libel to include even those with the use of “computer system or other similar means that may be devised in the future.”

“This must never be countenanced if only to remain consistent with the constitutionally prescribed freedom of the press,” Escudero said.

The delay in the high court’s  decision on the petitions will give other groups an opportunity to file a similar suit.

Pifa said it would file its petition against RA 10175 on Monday.

The National Union of Journalists of the Philippines said it would file a separate case. It posted its petition online (http://www.nujp.org/no-to-ra10175/) to solicit signatures from individuals and organizations.

Kabataan party-list group set up an online petition (http://www.change.org/petitions/junk-the-cybercrime-prevention-law) calling on President Aquino, Congress and the Supreme Court to junk the law. It had gathered 36,000 signatures as of 4 p.m. Tuesday.

In the House of Representatives, Bayan Muna Rep. Teodoro Casiño and Palatino filed a bill also seeking to repeal several provisions of the cybercrime law.

Casiño said one of the threats in the new law came from Section 6, which says that all offenses defined under the Revised Penal Code (RPC) and special laws, such as libel, committed through information and communication technologies, shall be charged with a penalty one degree higher than that provided in the code.

“By imposing a penalty one degree higher than what had been stated in the RPC on libel, longer prison terms are guaranteed for persons found to have published or posted material containing libelous remarks online,” Casiño and Palatino said in the explanatory note.

The law, they further said, would have a “chilling impact” on bloggers, online journalists and other Internet users because websites could be taken down without due process.

Casiño said amending the law would bring it back to its original intention of combating websites on child pornography, data and identity theft, and other Internet scams.

One of the House authors of the law, Aurora Rep. Juan Edgardo Angara, said he was open to discussions about amending the measure. He said he was amenable to making penalties for libel civil rather than criminal.