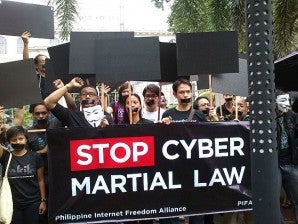 Netizens troop to the Supreme Court to protest of the Cybercrime Prevention Act. PHOTO/ TECH TORRES

MANILA, Philippines—Various groups on Tuesday trooped to the Supreme Court and urged it to strike down several provisions of Republic Act (RA) No. 10175 or the Cybercrime Prevention Act of 2012.

They also asked the high court to stop its implementation on Wednesday.

Their protest action, dubbed ‘Black Tuesday,’ started at around the same time the justices of the high court sat in en banc session in which part of its agenda are the seven petitions filed against RA No. 10175.

Those who participated in the group are Bagong Alyansang Makabayan (Bayan), Philippine Internet Freedom Alliance or Pifa, group of photographers and bloggers and a social networking group headed by Marlene Aguilar.

Bayan Muna Rep. Teddy Casino joined the protesters and said the version of the law passed at the House of Representatives did not include, for example, criminalizing libel in cyberspace, the takedown powers of the Department of Justice (DOJ) over websites, and the monitoring of correspondences and data traffic of subject persons and sites.
Some of the provisions that petitioners want to declare are the following:

Sec. 4 (a)(3), which includes data interference, defined as “the intentional or reckless alteration, damaging, deletion or deterioration of computer data, electronic document, or electronic data message, without right, including the introduction or transmission of viruses,” in the list of cybercrime offenses;

Sec. 4(b)(3), which lists computer-related identity theft, defined as the intentional acquisition, use, misuse, transfer, possession, alteration or deletion of identifying information belonging to another,  as one of computer-related offenses;

Sec. 4(c)(4), which criminalizes libel, not only on the internet, but also on “any other similar means which may be devised in the future;”

Sec. 6, which  raises by one degree higher the penalties provided for by the Revised Penal Code for all crimes committed through and with the use of information and communications;

Sec. 7, which provides that, apart from prosecution under the law, any person charged for the alleged offense covered will not be spared from violations of the Revised Penal Code and other special laws;

Sec. 12, which authorizes the real-time collection of traffic data;

Sec. 17, which authorizes service providers and law enforcement agencies to “completely destroy the computer data subject of a preservation and examination” order;

Sec. 19, which authorizes the DOJ to block access to computer data when such data “is prima facie found to be in violation of the provisions of this Act;” and

Sec. 20, which states that those who fail to comply with provisions of Chapter IV (Enforcement and Implementation), specifically orders from law enforcement agencies, shall face imprisonment of prision correctional (6 months and 1 day to 6 years) in its maximum period or a fine of P100,000 or both, for each noncompliance.

Read Next
Jinkee Pacquiao to run for Sarangani vice governor
EDITORS' PICK
Manila is 78th most expensive city in the world for foreign workers
TeaM Energy pushes development programs to help in pandemic rebound
Want to help local farmers? Shop small and eat Real Food
Piolo Pascual: The Ultimate Heartthrob continues to level up
ICC is everything but a court of ‘white people’
Garcia softens stance, meets IATF halfway on swab-upon-arrival policy
MOST READ
Sharon Cuneta on living in the US: ‘Nagagawa ko lahat ng normal na bagay’
Mike Nieto asks fans: ‘No below the belt remarks’ toward South Korea
ICC is everything but a court of ‘white people’
Duterte-Duterte tandem possible but ‘winnability is another question’ — Binay
Don't miss out on the latest news and information.