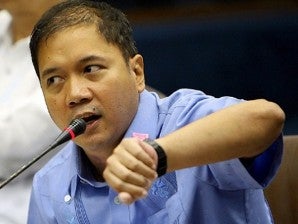 The United Nationalist Alliance (UNA) kicked off the election season on Monday on the wrong foot.

One of the coalition’s candidate, businessman Joey de Venecia, pulled out at the last minute, guest candidates gave it the snub and organizers abandoned gimmicks planned for the collective filing of the certificates of candidacy of its senatorial slate in the Commission on Elections (Comelec).

UNA leaders—Vice President Jejomar Binay and former President Joseph Estrada—and its senatorial candidates were mostly on the defensive in their media interviews in their assembly point at the  Manila Hotel  as they downplayed the  departure of De Venecia from the decimated ticket.

There was rife speculation on who would take the place of De Venecia from television host Edu Manzano to spurned Liberal Party senator wannabe Quezon Rep. Lorenzo Tañada III.

San Juan Rep. Joseph Victor Ejercito said that he felt bad that his friend Tañada was abandoned by his party and that he would endorse UNA’s adoption of Tañada.  However, Binay declared that UNA was not considering Tañada “anymore.”

The Binay-Estrada  event also lost much of its glitter as three of its guest candidates—Senators Loren Legarda and Francis Escudero and Movie and Television Review and Classification Board Chair Grace Poe-Llamanzares—attended the Liberal Party bash at Club Filipino while they were no-shows at the Manila Hotel.

Binay and Estrada spent most of their time answering media’s questions on how UNA would be moving forward after being snubbed by Legarda, Escudero and Poe after the coalition made a big splash of these top contenders’ supposed decision to join UNA.

“We believe we will win, we have a strong lineup,”  Estrada said, brushing off the snub. He said that with Binay and Senate President Juan Ponce Enrile, the coalition would make a decision on the guest candidates soon. “We will make a policy on that,” said Estrada.

The UNA event also did not live up to its hype as the gathering lacked  cohesion among the candidates, and organizers abandoned some of its promised highlights, such as Estrada driving a jeep to ferry the candidates to the Comelec at “ala-una” (they were a few minutes late). They  rode a minibus wrapped in Binay’s violet-themed slogan and they also dropped the plan to stop over at Manila Cathedral for a short prayer.

De Venecia, who was under the  public spotlight in 2007 with his explosive testimonies on the National Broadband Network controversy, lost his bid for a Senate seat in 2010.

‘My time will come’

In deciding to leave the slate this time, De Venecia said his investments in the business process outsourcing  and technology sectors would need his full attention to continue gains in recent years.

“I have therefore decided not to run for the Senate in 2013. Instead, I will pursue these immediate business endeavors bringing investments and jobs to our country. In so doing, I shall have achieved through business what I will only begin achieving through the Senate,” he said. “My time in the Philippine Senate will come.”

UNA secretary general Navotas Rep. Tobias Tiangco shrugged off speculation that De Venecia’s withdrawal stemmed from his poor showing in the surveys. He was reported to be No. 13.

Enrile said that De Venecia, the namesake son of the former House Speaker, was just being  “a very practical person just like his dad.”