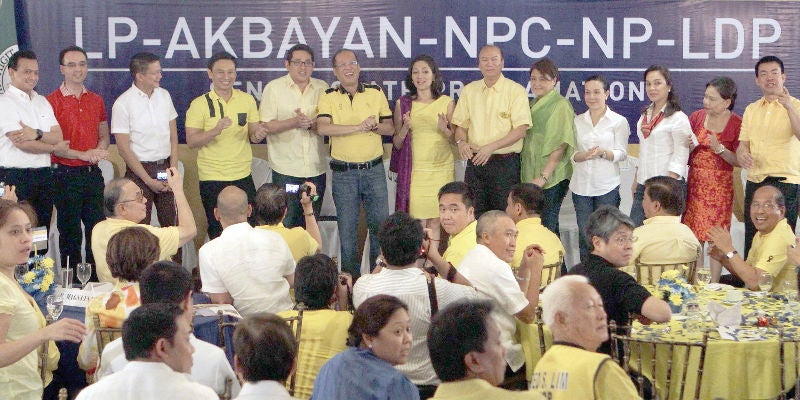 Setting the tone for next year’s elections, President Benigno Aquino declared Monday that the administration coalition would echo his reform agenda during the campaign season.

As he presided over the official proclamation of the administration coalition’s senatorial ticket at Club Filipino in San Juan City, Mr. Aquino underscored the importance of having key allies in the Senate to ensure the passage of his legislative agenda for the remaining three years.

“Every three years, our nation faces a crossroad. The question is: Where are we headed? Do we continue to tread the path we have taken, or do we revert to the old way of doing things? Are we optimistic about the future, or would you prefer the previous condition?” he asked in a speech delivered in Filipino.

Three of the administration candidates—Legarda, Escudero and Llamanzares—have also been adopted as candidates of the rival United Nationalist Alliance (UNA).

“This I assure you: The 12 candidates being offered by this coalition will help harvest the fruits of reforms we have laid down the last two years, three months and one day. They promise us that they will not steal. They will expedite the pace of change that we’re enjoying, and they will not betray your trust. You—the people—are the Boss,” Mr. Aquino said.

He explained the vote of his “bosses” come May 2013 would eventually decide whether the nation would “continue with the right” path he had set at the beginning of his term.

“The resounding message should be—the reform and change undertaken the past two years were right. We want to speed up change, and we’re now offering to you those who would help you achieve this,”  the President said, referring to the slate.

Assuming the role of a conductor, he likened the nation to an “orchestra” that was expected by the audience to come up with a “harmonious sound instead of an out of tune soloist who thinks only of himself.”

Budget Secretary Florencio “Butch” Abad, an LP stalwart, told reporters that the administration’s nationwide and grassroots’ campaign would carry the message, “Kapag walang corrupt, walang mahirap (There is no poverty if there is no corruption).”

“You may add economic growth and expansion because, I think, that’s where we’re at right now, and we want to go deeper into. We need to go faster in the legislation—tax reforms and social policies, freedom of information,”  Abad said.

In his speech, Mr. Aquino reiterated the gains so far achieved by his two-year administration vis-à-vis the failures and inefficiencies of the Arroyo administration.

He said that just two years and three months into his six-year presidency, “we have not just carried the burdensome problems they had left, we even surpassed the challenges.”

Thus, he said, the sides taken by the two rival election coalitions were clearly delineated.

Apparently taking the first jab at UNA, he stated the obvious.

“The critics are with them; those willing to cooperate are with us. Isn’t it that the characters who are always critical of what we do every time they open their mouths are on their side?” he asked.

The President acknowledged the citizens who were willing to rally behind the achievement of his goals.

“Our belief is that we should keep an open mind because free speech brings forth clear solutions unlike others who are always critical of what we say. We can’t be in one boat where the crew would row backwards… while we are striving in earnest to move forward,” the President said.

He gave a noticeably longer introduction to both Llamanzares and Pimentel, but gamely teased Bam Aquino and Trillanes.

“Koko was given a six-year mandate, but was only given with more or less two years,”  Mr. Aquino said, emphasizing that Pimentel was a duly-elected senator in 2007, and thus wisely rejected calls for him to run again in 2010 pending the outcome of his electoral protest.

The President thanked Llamanzares for choosing to run on the LP-led slate, after turning down many politicians who “courted her.”

Turning to Trillanes, Mr. Aquino described his back-channel negotiator in talks with China as an “example of a persistent and brave soldier.”

“In his (second) term, perhaps he would show to us what it means to be a senior senator,” the President said, triggering chuckles from the audience as the cameras panned to show Trillanes flashing a pained smile.

The President did recognize Bam Aquino as his cousin, but issued a warning: “If you lose your way, forget my mother and father; you will have to answer first to our grandmother. And when she’s done (with you), I will be next.”

LP officials earlier said the administration candidates may be adopted by other parties, but they do not want members to join the campaign sorties of the other groups because that would be akin to campaigning for their fellow candidates’ rivals.

Escudero said he would campaign on his own but would work with the rules of both coalitions that adopted him. Asked if he would appear on stage with any of the two slates, he said had not talked about it with coalition officials.

Legarda said she wanted to bring her campaign directly to the people. As to whether she would join the sorties of the coalitions, she said those operational details could be worked out later.

Legarda also said it was the President himself who asked her to join the administration coalition after he invited her to Malacañang last week.

According to her, she told him she did not have to join the slate and did not want to ease anybody out of it, but he replied that he wanted her to join his line up and that a slot was reserved for her.

She said she would have continued supporting the President even if she was not made part of the administration coalition.