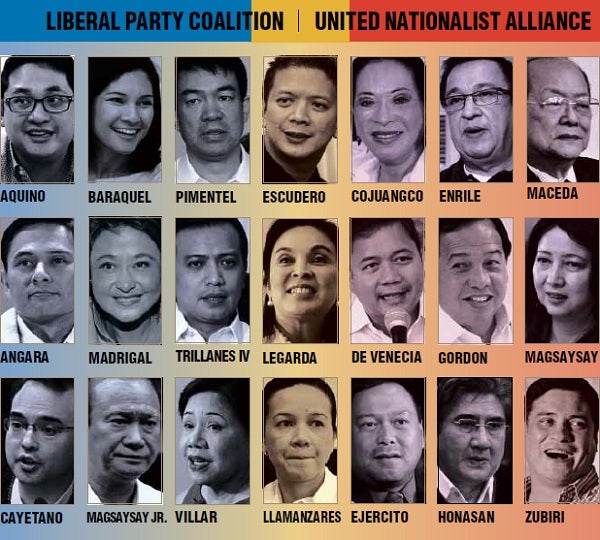 ‘IF YOU’RE GUESTS, WHICH HOUSE’ The Liberal party-led administration coalition made a clear parameter on Saturday with regards Senatorial candidates for the 2013 midterm elections: Don’t attend rallies of the rival group. INQUIRER PHOTOS

The Liberal party-led administration coalition has made one thing clear to so-called common candidates on the eve of the filing of candidacy papers for the 2013 polls: You do not attend the rallies of the rival United Nationalist Alliance (UNA).

While the ruling party is open to some of its chosen candidates being adopted by the UNA, it has strong objections to these candidates appearing in the latter’s campaign rallies, Liberal Party (LP) leaders said on Saturday.

“They could be adopted by UNA but they should not join the rallies of UNA. That would be crossing the line,” said a top-ranked party leader, who asked not to be named for lack of authority to speak on the matter.

“I don’t think there will be a relaxation of the rules,” the source said.

Reelectionist senators Loren Legarda and Francis Escudero, and Grace Poe-Llamanzares, chair of the Movie and Television Review and Classification Board, have emerged as common candidates of the ruling coalition and the UNA.

House Majority Leader Neptali Gonzales II, a senior LP member, said that “it would not look good, even for the candidates themselves” to be seen campaigning for both tickets.

Doing so would suggest that a common candidate was endorsing his fellow aspirant on one ticket while junking those on the other, he said.

“While we cannot prevent them from being adopted by the opposing ticket because that’s beyond our control, they should not campaign with the other side,” Gonzales said.

‘Where do you stand?’

Interior Secretary Mar Roxas, the LP president who announced on Saturday that he would be taking a leave from the party presidency, spelled out the kind of challenge facing these common candidates.

“You should ask the candidates: If they’re guests, which house? There are guests. If you’re a guest, then where is your house? Where do you stand?” Roxas said.

“If I were the voter, I’d ask that question,” he said.

The situation was a “reflection more on the candidate, rather than party,” he said. After all, the party’s position during Mr. Aquino’s presidency has been clear, he said.

Only Magsaysay, Madrigal and Bam Aquino are members of the LP. The rest are from the LP’s coalition partners, the Nacionalista Party, Nationalist People’s Coalition, Partido Demokratiko Pilipino-Lakas ng Bayan (PDP-Laban) and Laban ng Demokratikong Pilipino. Escudero and Llamanzares are independents.

Bam Aquino and Llamanzares, the daughter of the late movie star and defeated presidential candidate Fernando Poe Jr., are new to politics.

According to an LP official, Legarda, who met with the President on Thursday, expressed her desire to attend the rallies of both coalitions but was told by Mr. Aquino she couldn’t show up at the UNA rallies. He could not say what the final arrangement with Legarda would be.

The same official said Llamanzares had indicated that she would not attend the rallies of UNA.

Asked if he would share the stage with Escudero, Roxas replied: “I’m not a candidate. I will perform my job as DILG (Department of the Interior and Local Government) secretary and a member of the Cabinet. Campaigning and politics are a candidate’s relationship with the Filipino people.”

Escudero is known to have promoted the Aquino-Jejomar Binay team-up in the May 2010 presidential elections. Roxas, Mr. Aquino’s running mate, lost to Binay in the vice-presidential race.

Next year’s midterm elections are seen as a test run for the 2016 presidential elections. Binay has declared his intention to run for president in 2016 while Roxas is the presumptive administration candidate.

Deposed President Joseph Estrada, a senior UNA leader who was once adamantly against sharing candidates with the administration coalition, took the LP stance against common candidates campaigning for both sides with equanimity.

“That’s OK,” said Estrada while pointing out that UNA was open to allowing some of its candidates to campaign with the other ticket.

Binay was not as composed about the issue. Interviewed by phone from Iloilo where he had been inducting UNA local candidates, the vice president said the common candidates should treat both parties fairly.

“What the candidates will do for the other party, the same should be done for UNA,” said Binay, who pointed out that UNA had ditched its rule that guest candidates must exclusively campaign for UNA in order to be accepted into the lineup.

“If the common candidates take the administration party’s stage, they should also take ours,” he said.

Estrada on Saturday said the UNA slate had room for two more. He said De Venecia, who ran for senator and lost in 2010, was reconsidering joining the Senate race next year.

Leaders of the rival coalitions on Saturday touted up the relative strengths and advantages of their respective lineups.

“It’s people from different places, parties and histories coming together to support the President’s vision for the country,” said Communication Secretary Ricky Carandang.

“Our senatorial lineup has chosen to walk the path of the President,” he said.

“We are offering the voters a choice: to continue with what President Aquino is doing through good governance or to return to the transactional self-serving politics of the past,” he said.

“This is a broad coalition of parties that has demonstrated its efficacy in pushing the Aquino administration’s reform agenda. Its extensive grassroots coverage will ensure victory for the administration’s coalition slate,” said Budget Secretary Florencio Abad.

“It’s a good mix of veteran legislators and young aspirants—social entrepreneurs, political activists and professionals—who have proven their worth in their respective fields,” he said.

UNA spokesperson JV Bautista described the UNA slate as also a good mix—of Mr. Aquino’s ardent supporters and harshest critics. He said the lineup was formed to provide voters with an alternative to Mr. Aquino’s partymates and partners in the administration coalition.

They will pursue Mr. Aquino’s reform agenda, “only more competently” than his allies, Bautista said.

“It’s a strong lineup. The candidates are doing very well in the surveys, most of them anyway,” he said.

He said common candidates Legarda, Escudero and Llamanzares were chosen because of their long association with UNA’s core leaders—Binay and Estrada—in the struggle against former President Gloria Macapagal-Arroyo.

He claimed that the three were already in the UNA lineup before the LP coalition wooed them.

In Legarda’s case, it was only after UNA announced that she had been drafted that the President invited her to join the administration coalition, he said.

According to Binay, in terms of the UNA slate’s strength, the effect of the common candidates was neutral.

“From senators down to local candidates, we are very, very strong. If you put our candidates one-on-one against the other party, we are stronger than they are,” he said.