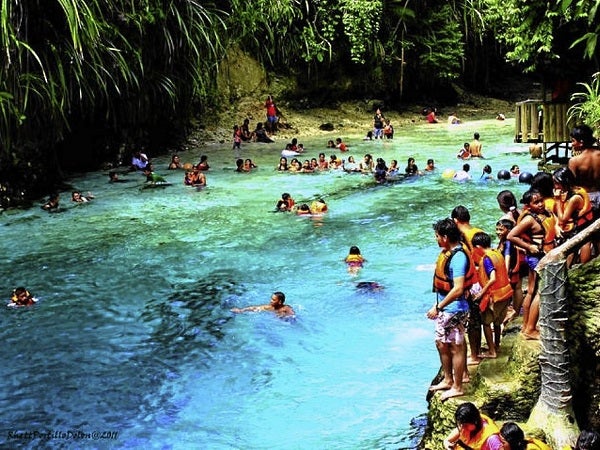 Looking at pictures of the Enchanted River in countless Internet sites, one may scream “Photoshopped!” But such is the essence of the most famous tourist spot in Hinatuan, Surigao del Sur: It’s too magical to be natural.

Barangay Cambatong, where the river is found, is steeped in oral tradition. And the lore of how the water body got its mystical tint is not hard to believe. For who else could have created this bewitching palette of colors but the ethereal beings endowed with the powers of magic and enchantment?

Legend has it that one firefly-lit night, fairies floated above the river while elves watched from cliffs and banks. With their wands, the fairies stirred the water, toyed with sapphire and jade, and made the tones fade and meld to achieve a shade of bluish green that now paints the riverbed.

Twelve kilometers from the highway junction, the Enchanted River shapes the boundary of Barangays Talisay and Cambatong in Hinatuan. Though some portions of the well-maintained dirt road are undulating, these don’t make the ride bumpy and dusty as some tourists wrote in their blogs. 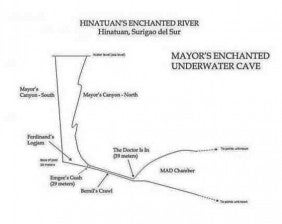 What lends credence to the river’s name? Fishermen swear to seeing various fish but couldn’t catch any no matter how they tried—not by hand, spear or net. Fishwives lay their fish traps at dusk only to find them hanging on a branch the day after. A foreigner plunges into the visible riverbed and finds it unfathomable. A father and son see two long-haired, alabaster-skinned women bathing under a plump moon then vanishing in a swirl of fireflies. Boatmen gape at sunken boulders of twisted images that are there one day and gone the next.

Also, there’s a cave farther away, just before the river flows out to the Hinatuan Bay facing the Pacific Ocean. Accessible by foot during low tide, the cave showcases limestone naturally carved as furniture sets and positioned as though Neptune were hosting a party for underwater denizens.

An added attraction when visiting the Enchanted River happens at noon when the bell is rung and bathers are requested to get out of the water for about an hour. As the Hinatuan Hymn begins to play, groups of fish come out from nowhere like on cue and feed on food scraps the caretaker and tourists throw into the river. This feeding frenzy makes spinning scales and tails catch light, turning the natural pool into a liquid canvas of the magical and the fabulous.

It was the Father of Tourism himself, Modesto Farolan, who gave it its name through a poem titled “Rio Encantado” (The same had been set to music by Francisco Rio). Then a prewar manager of the Madrigal-owned Port Lamon Lumber Co., which exported round timber, Farolan wrote it for Geminia, a local lass that was his inamorata.

The poem is a romantic evocation of the Enchanted River as an unspoiled, untouched and undiscovered trysting cocoon for lovers. It talks of a “crystalline stream flowing from hidden spring,” “rocky brims ’mongst vines,” “orchids and ferns,” “canopy of rich green mirrored in water-tinted blue,” and “gold lined with gems.”

Farolan’s Enchanted River has changed over time. While the turquoise bed remains unchanging beneath a cool water sparkling like quicksilver, the environs have given way to some structures others may find incongruous with the thematic concept of nature. Where cliffs used to be, the local government has built concrete staircases to make it easy for tourists to bathe and swim.

A few meters away from the bank that overlooks the river are some cottages that tourists can rent for P100. A wooden footbridge on stilts leads to a terminal of outrigger boats that ferry tourists to the nearby Vanishing Island and beach resort for P150 an hour.

For nonswimmers, there are kiddie and adult pools. Stalls offer various seafood at reasonable prices outside the cordoned area, just across the main gate.

Lifeguards are employed for safety precautions and life jackets are rented out at P100 each for a whole day’s use. Entrance fee is P20.

Be forewarned: Parking is difficult.

The Enchanted River is like a Monét painting. And what makes it more bewitching is the element of dread attached to stunning visuals. But for the brave-hearted, it’s plunging into the abyss that makes the river a surreal experience. And one wouldn’t know the feeling until he gives it a try.