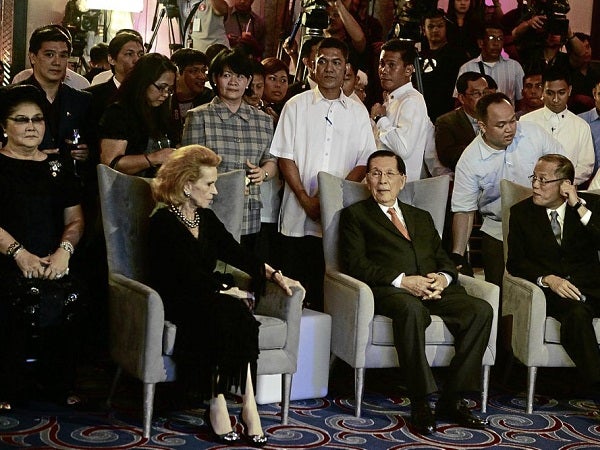 But it only took an invitation from the now wildly popular Senate President Juan Ponce Enrile to bring together an odd assortment of colorful characters whose careers and personalities have crossed, intersected and clashed on the very public stage of Philippine politics.

Just as unthinkable was how the usually flamboyant former first lady Imelda Marcos failed to be the center of attention during the book launch of “Juan Ponce Enrile: A Memoir” in a Makati hotel on Thursday night.

Marcos, who declared martial law in 1972 that saw the arrest and detention of Mr. Aquino’s father, former Sen. Benigno Aquino Jr., is still widely believed to be behind the senator’s death in 1983.

President Aquino also shook hands with Enrile who, together with his loyal squire Sen. Gregorio Honasan, remains associated with several coup attempts against his mother.

Also at the book launch were former President Joseph Estrada and his son, Senate President Protempore Jinggoy Estrada, who were seen hobnobbing with Speaker Feliciano Belmonte Jr., the head of the prosecution team that tried to convict the impeached president for plunder 11 years earlier.

Former President Fidel Ramos, the implementor of martial law, was among the guests, as was President Aquino’s uncle, former Sen. Agapito “Butz” Aquino, a prominent opposition figure during the Marcos years.

Also present were Vice President Jejomar Binay and Executive Secretary Paquito Ochoa of Malacañang’s so-called “Samar” bloc, which was rumored to be behind the Noy-Bi ticket that led to the junking of President Aquino’s vice presidential mate, Mar Roxas.

This led guests to wonder in hushed tones why members of that other Malacañang faction, the ubiquitous “Balay” posse—said to be backing Roxas—were not around. Were they not invited? people asked.

Wags also cheekily noted the absence of Sen. Antonio Trillanes IV, who had recently engaged Enrile in a word war that began with the Camarines Sur bill and traveled all the way to Scarborough Shoal.

Not surprising, since Trillanes and his Magdalo cohorts destroyed the façade of The Manila Peninsula’s entrance in a siege in November 2007.  The book launch was held in the hotel.

In fact, many of the personalities mentioned in Enrile’s memoirs were seated in the enormous Rigodon Ballroom of the Manila Pen, where the furniture was arranged in the style of a grand salon facing a giant screen set above a stage.

Guests watched a short film that highlighted Enrile’s role and influence in the military and his key participation in the 1986 Edsa revolt that ousted the Marcoses. Imelda Marcos, whose husband’s 23rd death anniversary was observed on Friday, Sept. 28, remained composed as she stared ahead.

Of his 772-page autobiography, Enrile said: “The people I mention and the events I depict here were those that I had personally encountered and witnessed along my journey.  I have no intention to make myself look good at the expense of others, or to settle old scores with anyone.”

Interestingly, the book mentioned the suicide of actor Alfie Anido in 1981.

“My enemies in the Marcos regime,” including Marcos chief of staff Fabian Ver, spread the rumor that his son Jack was behind the actor’s death, Enrile said.

The younger Enrile recalled that it was in 2008 when his father bared his plan to write his memoirs.

“Even you, my son, do not know who I am and I have to tell the Filipino people who I am,” he quoted his father as saying then.

The congressman said that with his father’s memoirs being publicly available, “a number of history books would have to be rewritten” as the book contains “revelations that intend to separate myth from legend” about “some of the more controversial periods of our history.”

Enrile spent four years writing the book that journalist Nelson Navarro trimmed down from the original 2,000-page “collection of manuscripts” to its present form.

The Senate President thanked President Aquino’s “graciousness” for showing up “despite the rather colorful political encounters I had with the martyred Ninoy Aquino and the much-admired icon of democracy, President Cory.”

Errors of the past

Mr. Aquino said Enrile’s memoirs “(would) allow future generations not just to explore other perspectives; it empowers (them) to avoid the errors of the past.”

Enrile’s book, the President said, “will hopefully give us an opportunity to hear insights from the side of those who decided, for instance, to experiment with strongman rule. What went through their minds back then? How do they choose to remember it now?

Enrile was believed to be the chief architect of martial law. The launch of his memoirs came a week after the country marked the 40th anniversary of President Marcos’ declaration of martial law in September 1972.

Mr. Aquino said it would be healthy for the young generation to read Enrile’s memoirs.

“Any book aspires to outlive its author and the milieu from which it sprang. How we bear witness may lead to our making opposite conclusions … For younger readers, let me assure you this is a healthy thing. Being exposed to opposing views is the hallmark of a true democracy,” the President said.

“Who would have thought Manong Johnny and I could find common ground, and vote the same way on some, though maybe not all, measures? We could agree to disagree on the past, but we also discovered we could agree on many things in the here and now—and contribute to the future betterment of our people,” Mr. Aquino said.

At the end of the day, he added, everyone would be confronted with the challenge of the Epistle of John:  “So then if we do not do the good we should do, we are guilty of sin.”

Said the President:  “We will be held accountable to our Maker for this. But we will also be held accountable to human history, and here the often-misquoted words of Edmund Burke come to mind. We are familiar with the saying, ‘For evil to triumph is for good men to do nothing.’ What he really wrote, I understand, was this, ‘When bad men combine, the good must associate; else they will fall, one by one, an unpitied sacrifice in a contemptible struggle.’

“May all of us hope to live as long, and as vivid a life as Manong Johnny; and may all of us seek, in this book, the lessons that will allow us to advance as a people,” he added.