15 years after ‘Crime of the Decade’, seven convicts cry for justice 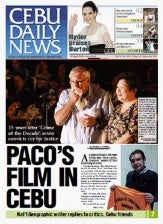 Applause mixed with tears as the film “Give Up Tomorrow” ended its first screening in Cebu.

The documentary film about the ordeal of Francisco “Paco” Larrañaga who was convicted with six other young men in Cebu City for the 1997 kidnapping and murder of the Chiong sisters was shown in the Marcelo Fernan Cebu Press Center in a full house of friends, family and supporters who believe to this day that Larrañaga and the others are innocent.

Now 34 years old, Paco waits out a prison term in a Madrid prison with a decision to make.

He can qualify for parole – and gain his freedom — if he admits guilt to the charge.

In the last scene of the film, Paco’s voice booms out against an image of the Spanish prison shot from a distance: No, he says, he is innocent and will not stop saying so.

The 90-minute independent film has picked up international film festival awards and was shown in the Cinemalaya festival in Manila last July but Wednesday’s private screening as a by-invitation event was the first time it was shown in Cebu “where the story began.”

Cheers went up when Collins said it was “the most special day of the whole journey” to bring the film to Cebu.

Efforts to arrange a commercial screening in Cebu were turned down by two malls.

“We did ask but they politely declined in a note that it is a very sensitive issue. But we are not giving up,” Melo Esguerra of the Philippine distribution committee told Cebu Daily News.

In Manila, the film will be screened on October 3-9 in theaters in Robinson’s Galleria and Robinson’s Ermita and on October 5-7, it will be shown in Greenbelt Trinoma and Alabang.

Paco’s mother, Margot Osmeña-Larrañaga, told the audience later that the film was not just about her son and the “Chiong 7” but about everyone who is deprived of justice and ends up in prison falsely accused.

“There are many poor people who are victims of injustice and could not afford to get justice. Paco told me we have to fight for these people because he said it’s not only for him who is innocent and all the other co-accused. He is fighting for all the others who are innocent,” Margot said after the 3 p.m. screening.

Cheers broke out in the 240-seat theater each time Paco would speak in the film about not givng up.

In the dark, people were seen shaking their heads in objection to statements made by Thelma Chiong, the mother of victims Jacqueline and Marijoy, the prosecution panel and the lone state Davidson Rusia.

Esguerra said the producers would do their best to show the film to interested groups.

“This film has to be spread to everyone. This film is beyond Paco and the Chiong sisters. It mirrors the judiciary and the way the local media frames a story. There will be no stopping us in making this film available, if not commercially, to law students, communication students and anyone who cares about the justice system. Cebu is where the story began and it is not where the story will end because this is such a universal story. It is a story for those who are fighting for the truth, in search for the truth and fighting for justice,” said Esguerra in an interview.

Mrs. Chiong, who is now the national vice president of the Crusade Against Violence, told MA-7 Balitang Bisdak , said the film doesn’t change the fact the Philippine courts have ruled with finality that Larrañaga and the six others were guilty of kidnapping and killing her two daughters after a night of gang rape and drugs.

“Mrs. Larrañaga is in a better position because she can still see her son, visit her son, and kiss her son. While I, in the past 15 years our lives have changed,” Chiong said in Cebuano.

The 90-minute film opens with an interview with Paco Larrañaga in his orange Bilibid prison shirt, saying he is ready to serve the death sentence but doesn’t want to go down without a fight.

“I wasn’t allowed to defend myself…. Getting that lethal injection without me getting a fair fight“ he said was not acceptable.

It took seven years to produce the film with raw interviews with over 100 people, said Syjuco, whose brother is the husband of Paco’s sister Mimi.

It includes an interview with Paco in the death row of Muntinglupa, the trial in Cebu City, and in Spain, where he was transferred in 2010 as an exhange prisoner arising from a treaty with Spain, by virtue of his Spanish citizenship.

“It is a dense story and it was a challenge that there was not much space to include everything in the 90-minute film,” Syjuco told the audience in his Skype videocast from the US.

The Chiong sisters were abducted in July 16, 1997 outside Ayala Center. Marijoy’s body was found in a ravine in Tan-awan, Naga. About two months after, Larrañaga and the others were arrested. To this day, Jacqueline has neer been found.

The sensational case became known as the “trial of the decade” in Cebu due to the prominence of the suspects. Paco’s mother is a cousin of former governor Emilio Osmena. Another suspect, Josman Aznar, also comes froma prominent Cebu family.

The film portrays the trial and later conviction, upheld by the Supreme Court, as a miscarriage of justice. Over 40 witnesses, mostly friends of Larranaga, swear he was in Quezon city attending his culinary school class the day the Chiong sisters were abducted.

In 2008 the death penalty was abolished.

With a new treaty between the Philippines and Spain in place, Paco, who has dual Spanish-Filipino citizenship, was flown in 2010 to Madrid where he continues to serve his sentence. The other convicts remain in Muntinglupa./WITH Eileen Mangubat