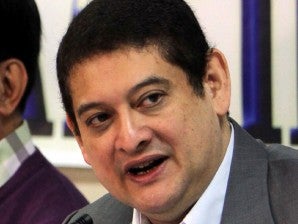 Senator Teofisto Guingona III on Thursday filed a petition in the Supreme Court asking the tribunal to declare null and void libel penalty provisions in the Cybercrime Prevention Act of 2012 that he said violated basic constitutional rights and threw the nation back to the dark ages.

Senators Francis Escudero and Alan Peter Cayetano also announced Thursday they would file bills that would amend the harsh jail terms under Republic Act No. 10175, which President Aquino signed on Sept. 12. A hacker group, Anonymous Philippines, defaced websites of Bangko Sentral ng Pilipinas (BSP) and other government agencies in protest.

While saying it was necessary, Guingona said that the law contained “confusing and vague provisions that suppresses the citizens’ right to freedom of speech and expression.”

“Without a clear definition of the crime of libel and the persons liable, virtually, any person can now be charged with a crime—even if you just like, retweet or comment on an online update or blog post containing criticisms,” he said.

RA 10175 also “demonizes technology and sends the message that the computer user is more evil than those who write on traditional media,” Guingona said.

He said its provisions were “an assault against our fundamental constitutional rights and throw us back to the dark ages.”

“We already have responsibilities attached to print, TV and radio. So what the cybercrime act does is to also attach responsibilities in cyberspace,” he said. The law concerns “people who are not familiar with being responsible about what they write,” he said.

Asked about hackers defacing government websites, Lacierda said: “It won’t win them brownie points … The better venue for them is to really show their protests in a proper forum.”

Somebody pulled a fast one

Noting strong opposition to the measure after it was signed into law by the President, Cayetano said he planned to file a bill to address the penal provisions on online libel.

He said that while there must be some accountability on the use of the Internet, liability should be civil, not criminal.

Escudero admitted that he was surprised by the public reaction to the penalties.

“That slipped past us. I didn’t see that when we voted and signed the committee report but my position has been clear as regards that matter. I’m one of the principal authors, if not the first, who filed a bill to decriminalize libel in our statute books,” he said.

Escudero in a news forum discounted negligence as a reason for the mistake of criminal online libel finding its way into the law.

“I don’t want to ascribe any reason or motive. I would just personally admit my own shortcoming as regards that matter,” he said “It wouldn’t have passed if nobody pushed for it.”

Senate Majority Leader Vicente Sotto III earlier admitted having a hand in the inclusion of libel as a crime punishable under the Cybercrime Prevention Act. “Libel is a crime. What do you think it is?” he told reporters.

In a 39-page petition for certiorari and prohibition with application for temporary restraining order, Guingona asked the high court to stop the implementation of Sections 4 (c), 6, 7 and 19 of the law and declare them unconstitutional.

Section 4 (c) of the law criminalizes libel, not only on the Internet, but also on “any other similar means which may be devised in the future” while Section 6 raises by one degree higher the penalties provided for by the Revised Penal Code for all crimes committed through and with the use of information and communications.

Section 7 provides that apart from prosecution under the RA 10175, a person charged may still be sued for other violations of the penal code and other special laws.

Section 19 authorizes the Department of Justice to restrict or block access to computer data when such data are “prima facie found to be in violation” of the law.

“It can be reasonably expected that the general public would now be under the impression that expression of public opinion with the use of information communication technology is now already a criminal offense under the law. Our people, especially those in social media, should not be forbidden from expressing their thoughts and opinions in cyberspace whether critical or not for fear of being labeled as cyber criminals,” Guingona said.

The senator pointed out that under the Revised Penal Code, libel committed by means of writing, printing, lithography, engraving, radio, phonograph, painting, theatrical exhibition, cinematographic exhibition and other similar means would only be punished by six months and one day up to four years in jail. However, under Section 6 of the RA 10175, libel committed “through a computer system or any other similar means under the Cybercrime [Prevention] Act would be the higher penalty of imprisonment of six years and one day up to 12 years, Guingona said.

“This is clear a violation of the equal protection clause of the Constitution. It unduly discriminates persons of the same class, as it penalized the act of publishing libelous materials through Internet more heavily than those which are committed by means of writing, printing, etc.,” he said.

Section 7 exposes an individual to punishment twice—contrary to the rule on double jeopardy, which means that “if an act is punished by a law and an ordinance, conviction or acquittal under either shall constitute a bar to another prosecution for the same act,” he said.

Guingona also criticized Section 19 for giving the justice department “unbridled authority” to issue an order restricting or blocking access to one’s computer data based merely on prima facie evidence. This, he said, was a “blatant” violation of an individual’s right against unreasonable searches and seizures.

RA 10175’s definition of a cybersex crime is also too broad, the senator said, pointing out that under the new law, an act would be punishable simply because there was an exhibition online of sexual organs or sexual activity.

This, he said, would cover nude materials that are classified as artistic works.