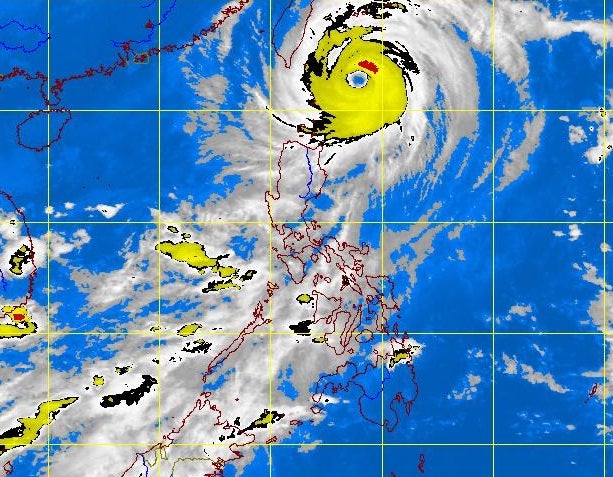 Supertyphoon “Lawin” has weakened as it approached Batanes Thursday, the weather bureau said.

In its 5 p.m. bulletin, the Philippine Atmospheric, Geophysical and Astronomical Services Administration (Pagasa) said it has hoisted storm signal No. 3 over the Batanes group of islands.

The Pagasa warned that the typhoon is expected to pack maximum winds of 185 kilometers per hour in the next 18 hours and gustiness reaching 220 kph.

Storm signal No. 2 is up over Cagayan including Calayan and the Babuyan group of islands, with winds reaching speeds of 61 to 100 kph.

The provinces of Ilocos Norte, Kalinga, Apayao, Abra and Isabela are under storm signal No. 1, with winds packing up to 30 to 60 kph.

Forecaster Raymond Ordinario said that as of 4 p.m. Thursday, Lawin was spotted at 210 km east of Basco, Batanes.

By Saturday, the typhoon is expected to be 270 km north of Basco.

The weather bureau said the typhoon is projected to continue its northwest track at 13 kph and will be out of the country’s area of responsibility by tomorrow afternoon or evening.

On Wednesday, the weather disturbance was projected to reach maximum winds of 205 kph and gustiness reaching 240 kph.

In its advisory Thursday afternoon, the Pagasa warned residents in coastal areas to be on the lookout for storm surges brought about by the typhoon.

Likewise, fishermen were reminded not to go out to sea, particularly to the eastern coast of Central Luzon, due to the expected rough waters.

The rest of Luzon, which are not under any storm warnings, may expect light to moderate rains, while Mindanao will experience fair weather.