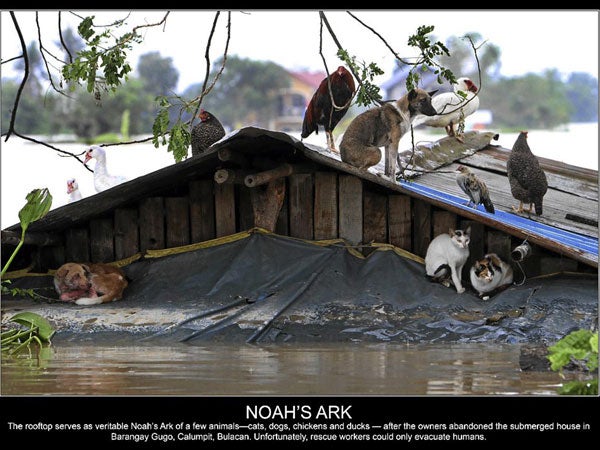 Photographer Lyn Rillon, who has been shooting for the Inquirer for seven years, won both a special citation and the top award in the News Photograph category.

The annual awards organized by the Catholic Church cited Rillon for her photo “Noah’s Ark,” which captured animals that took shelter in an abandoned house in Bulacan amid unprecedented flooding in 2011.

She was on her way down the stairs when Rillon was again called to receive the top prize in the same category, this time for the photo “No Ordinary Traffic Violator.”  The picture showed a Ferrari driver handing a bribe to a traffic enforcer to evade a ticket for ramming the center island on Meralco Avenue in Ortigas, Pasig City.

Two other Inquirer photographers were also nominated in the category.  Raffy Lerma was a finalist for his photos “Candles for Japan” and “When the Wind Blows, The Cradle will Rock” while Marianne Bermudez was nominated for her photo captioned “Lifeline.”

The Inquirer also won in the Best News Coverage category for its comprehensive chronicle of the “Sendong” disaster in Cagayan de Oro and Iligan City in December last year.

Reporter DJ Yap, who was sent from Manila to join The Inquirer Mindanao team, roamed the disaster zone for five days and came up with accounts of victims that were both sad and hopeful.

“The challenge there was the emotional part… That’s really where you’ll see the misery of the people.  I remember on my last day there, that was the first time I cried in a coverage when I saw a little girl who had lost everyone in her family,” Yap said.

He was referring to 7-year-old Michaela Tabilon, who lost both her parents and two brothers in the flash flood that inundated Bayug Island.

“That’s the only time when it struck me that this is really happening. I’ve covered ‘Ondoy’ (2009) and other disasters but when I saw that child, that’s really when it hit me,” said Yap, who has been reporting for the Inquirer for eight years.

The Inquirer reportorial team was also nominated in the same category for its coverage of Chief Justice Renato Corona’s impeachment trial earlier this year.

“First of all, I was already stunned when I got the invite from CMMA.  I felt like that was a win in itself.  But when my short story was called for the special citation, it was more than enough,” said Villafuerte, who is now on her ninth year in the Inquirer.

Inquirer columnist Minyong Ordoñez won two awards on Tuesday night.  He took home the prize for Best Special Feature for his piece “How Girls’ Chores Can Make A Man,” which appeared in the Inquirer Lifestyle’s “S” (Sexy, Stimulating, Sage, Survivor).

Editor Juan Sarmiento Jr. was also nominated for his full-page feature “Extending a Lifeline to a Quake/Tsunami Survivor.”

Ordoñez again won the prize for Best Opinion Column for a commentary piece.  He had a second nomination in the same category for his column “Gut Feel” while Amado de Jesus was also a finalist for his piece “Green Architrends.”

Voice to the voiceless

Catholic publication World Mission Magazine won the prize in the investigative category for a piece titled “Farms of Hope.”

CMMA chairman and president Antonio Cabangon Chua noted that entries had been increasing every year, showing “the prestige and credibility” of the annual awards.

This year, a panel of 50 judges deliberated on some 779 entries in a total 56 categories in print, radio, broadcast, music and film.

During the awards ceremonies, Manila Archbishop Luis Antonio Tagle reminded the media of the importance of “reflective silence,” the kind where one “becomes attentive, focused” and which gives the mind a break to become “just, true and peaceful.”

He also called on the media to help give a voice to the “different kind” of silence: People deprived of a voice.  “Part of reflective silence is to listen and give voice to the voiceless,” Tagle said.