Sen. Marcos flirts with idea of running for president 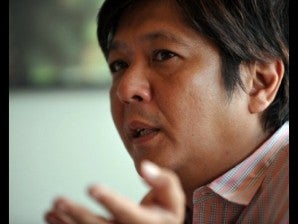 MANILA, Philippines – Still four years before the 2016 elections but Senator Ferdinand “Bongbong” Marcos Jr. is now tickled with the idea of returning to Malacañang,  his home for more than 20 years before his father, the late dictator Ferdinand Marcos, was toppled in an uprising in Februrary1986.

The senator could not hide his excitement when a reporter teased during a press conference on Wednesday that he should consider running for president in 2016.

“You, you work for it. Let’s see how it will turn out. Who knows..,” Marcos told the reporter in jest. He did not elaborate.

The senator also admitted that he was “extremely” excited about the new partnership of his group, the Nacionalista Party, with President Benigno Aquino III’s Liberal Party. The two parties forged a partnership for the 2013 elections.

“Very excited, extremely excited. Finally, I’m not in the opposition after what, 15 years..? It’s a new experience for me,” he said.

And Marcos did not mind sharing a stage with Aquino to endorse common candidates in next year’s election, saying he had been accustomed to such situation with the President several times.

Marcos clarified though that the partnership between LP and NP was only for  tactical alliance for the polls, and not for something else.

“This is for election [purposes]. This is not for policy [reasons]… not for ideology or policy. Our parties are only for the election,” he pointed out.