Invite me to your anniversary, Aquino tells ‘scared’ gov’t agencies 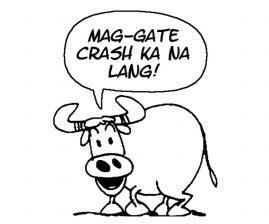 The president is daring government agencies to invite him during their anniversary celebrations, saying those which have done nothing wrong would have nothing to fear.

President Aquino was asked by the Philippine Daily Inquirer in a chance interview on Monday night how he felt about government offices supposedly having second thoughts about asking him to attend their anniversaries due to his penchant for “scolding his host.”

“If they have nothing to hide and they are not doing anything wrong, they should not be scared to invite me in their celebration,” the President said.

In July, when he attended the silver anniversary celebration of ABS-CBN’s “TV Patrol” show, Mr. Aquino criticized the executives and staff of the program for supposedly dishing out bad news.

Earlier this month, he criticized the Bureau of Immigration when he attended its 72nd anniversary celebration, blasting his hosts for “conspiring” in the escape of former Palawan Gov. Joel Reyes and his brother, Marlo.

The Reyes brothers are wanted for the killing of environmentalist Gerry Ortega in January 2011.

Mr. Aquino said he took the occasion to express his disappointment about the concerned state agency, adding that “it’s an opportunity to present matters of national importance.”

National Bureau of Investigation Director Nonnatus Rojas has accepted Mr. Aquino’s challenge, but said the NBI—which will celebrate its 76th anniversary in November—had yet to prepare for the event.

“I agree with the President and I want him to attend our anniversary, but we do not have final plans yet, ” Rojas said when asked if the NBI would invite Mr. Aquino on its anniversary. He said the bureau had a committee in charge of planning.

“We do not intend to hold a big celebration this year, compared to last year,” he said.

Rojas added that in keeping with Mr. Aquino’s austerity measure, “it’s not going to be a big celebration, in line with the efforts of the government to (be) low key.”

Read Next
Coronas ask DOJ for more time to reply to tax raps
EDITORS' PICK
4 essentials for overcoming data protection challenges in the New Normal
Smart reaffirms 5G leadership as PH’s most reliable 5G mobile operator
Pharmally’s Mago no longer in her condo unit — Gordon
Huawei’s relentless mission to bring ultimate health and wellness tracking for your fitness goals
294 areas in NCR under granular lockdown — PNP
Gordon to Pharmally’s Mago: Show up or be a fugitive
MOST READ
Senators secure Pharmally exec offering to turn witness
Carlo Aquino reveals he almost starred in hit Korean series ‘Squid Game’
‘If it goes to Malacañang, so be it’: Lacson vows to follow evidence in Pharmally probe
Typhoon Lannie likely to intensify on Monday
Don't miss out on the latest news and information.