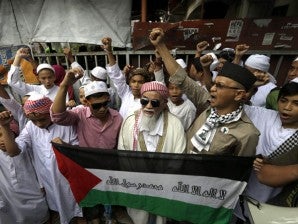 Filipino Muslims shout slogans during a rally outside the Supreme Court in Manila on Monday to petition the highest court to ban the public showing of ‘Innocence of Muslims.’ The front banner reads: ‘There is no God but Allah, Muhammad is the messenger.’ AP

MANILA, Philippines—The Supreme Court has banned the public screening of the anti-Islam film “Innocence of Muslims,” saying it infringes on religious rights.

The high tribunal on Tuesday directed the Movie and Television Review and Classification Board (MTRCB) to bar any public showing of the American-produced film that has sparked violence across the globe.

However, the high court did not rule if the Philippines should ask YouTube to block a 14-minute trailer of the movie, which mocks the Prophet Muhammad as fraud, womanizer and child molester.

The petitioners, who are members of the Bangsamoro Nation, mentioned that the film could be searched on Google and viewed on its video-sharing firm YouTube but failed to include them as respondents in their petition for a temporary restraining order, the Supreme Court said during Tuesday’s deliberation.

The petitioners argued that the film, produced by self-described Coptic Christian Nakoula Basseley Nakoula, is an “invasion of constitutional guarantee of free exercise of religion and to practice religion without fear or hatred.”

In their 15-page plea, petitioners  Agakhan “Benladin” Sharief, Datu Drieza Lininding, Datu Haj Ansari Alonto and Datu Nasser Dimapinto said that the government has the responsibility to ban the showing or any promotion of the “anti-Islamic film” that depicted their prophet as “a womanizer, homosexual and child abuser” and whose life was that of a “fool, philanderer and religious fake.”

The low-budget movie has angered Muslims in many parts of the world with protests turning violent resulting in the deaths of at least 51 people, including the US ambassador to Libya.

It also has renewed debate over freedom of expression in the US, Europe and even in the Philippines.

On Friday, law professor Harry Roque defied a ban by the University of the Philippines and held a screening of the film in his class, citing freedom of expression and academic freedom. With Associated Press