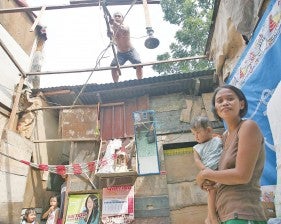 A WOMAN cradles her child in her arms as her husband repairs the roof over their house which sustained some damage after a tornado hit a community in Quezon City on Sunday. MARIANNE BERMUDEZ

At least 120 houses were damaged in Barangay Bagong Silangan, Quezon City, after a tornado tore through the community around 5:30 p.m. on Sunday.

Barangay chairperson Crisell Beltran said the tornado blew off the roofs of houses and uprooted several trees and electric posts, causing a power outage in the area.

Fortunately, no one was reported killed or hurt when it struck.

FEATURED STORIES
NEWSINFO
6 areas to be placed under Alert Level 3 from Jan. 28 to Feb. 15
NEWSINFO
Guanzon: Senator behind delay in Marcos DQ case
NEWSINFO
Guanzon to Bongbong Marcos camp: How do you know I had ‘minority opinion’ on DQ cases?

Beltran, meanwhile, asked the city government to provide assistance to affected residents, particularly those who need to repair their damaged houses.

Most of the houses in the area which is situated near a small creek were made of light materials.  Julie M. Aurelio