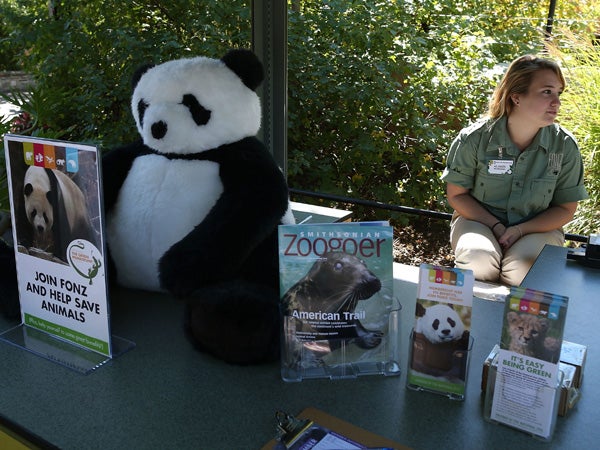 Smithsonian National Zoo worker Alison Venable works at a booth near the Giant Panda exhibit following the sudden death of a baby panda cub at the National Zoo on September 23, 2012 in Washington, DC. AFP

WASHINGTON – A week-old giant panda cub died Sunday at the National Zoo in the US capital, just days after it was seen squealing and squirming, officials said.

Keepers and volunteers realized something was wrong when they heard sounds of distress from the cub’s mother, Mei Xiang, in the morning, the zoo said in a statement.

After retrieving the as yet unnamed offspring, “veterinarians immediately performed CPR and other life-saving measures but the cub did not respond,” it said.

“The National Zoo community mourns the loss of the giant panda cub,” the statement noted, adding that its mother “is under close observation.”

Initial observations revealed no outward sign of trauma or infection, with veterinarians noting that the cub was “in good body condition” at just under 100 grams.

Following the sad discovery, zoo officials immediately turned off the “panda cam,” an Internet-accessible, 24-hour camera trained on the animals.

On Tuesday, two days after the cub was born, zoo staff said they had sneaked a few brief video peeks at the newborn, which at the time appeared to be developing well.

One black-and-white webcam clip posted on the “panda cam” website showed mamma bear tenderly picking up baby bear with her mouth as she shifted position.

“The cub actively squirms and vocalizes loudly in response— two good signs that the cub is healthy,” the zoo said at the time, adding there were even indications that the newborn was nursing successfully.

The cause and time of the cub’s death remains unclear, with officials saying a necropsy was under way. More details are expected in the coming days.

Zookeepers had chosen to keep a physical distance from Mei Xiang, on loan from China, in order to let her raise the cub naturally.

Giant pandas are rare and endangered, with as few of 1,600 surviving in the mountain forests of central China. More than 300 others live in zoos and breeding centers, mostly in China.

Mei Xiang and partner Tian Tian took up residence in Washington under a giant panda research and breeding agreement signed in January 2011 between the National Zoo and the China Wildlife Conservation Association.