Bikers remind Los Baños of slain UP student, 2 others 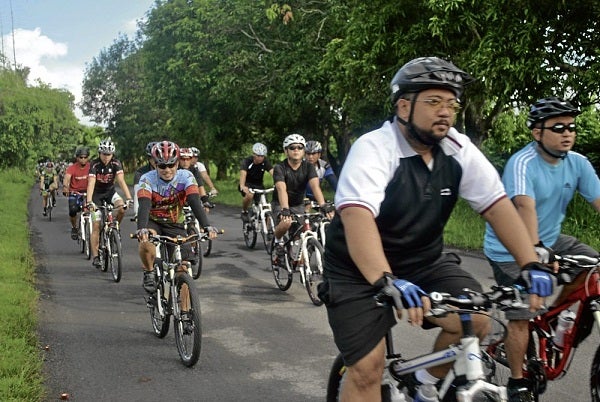 LOS BAÑOS, Laguna—Some 100 bikers slowed down and together rang their bicycle bells as they traversed the Institute of Plant Breeding (IBP) road in memory of Given Grace Cebanico and other victims of senseless murders like her.

It was in that portion of the road, inside the University of the Philippines Los Baños (UPLB) compound, where student Cebanico was raped and murdered on Oct. 11 last year.

Cebanico would have turned 20 Sunday.

“It brought back the pain when I saw where my daughter was found,” said Cebanico’s mother, Marlene, who rode a police patrol vehicle while the bikers continued the 20-kilometer trail in the campus, on Sunday.

Marlene, a public school teacher, returned to UPLB with her husband and relatives wearing Cebanico’s favorite color, purple. “It is really hard but we have to start living our lives again,” she said.

Cebanico’s murder prompted a community-wide outrage, a first since the double murder of UPLB students Eileen Sarmenta and Allan Gomez in 1993.

But just four months after Cebanico’s death was the rape-slay of Rochel Geronda, a 14-year-old student of Los Baños National High School, on Feb. 29, 2012. This was followed by the murder of Ray Bernard Peñaranda, who was killed in the same vicinity by robbers on March 4.

Although the suspects in all three cases have been jailed, the court proceedings are taking their toll on the victims’ families. The Cebanicos have to travel three hours from their hometown in Binangonan, Rizal, when there is a court hearing in Calamba City.

Peñaranda’s parents are also from Rizal while Geronda’s, from this town, don’t have much money.

“It has been almost a year and yet we are still in the pretrial stage,” Marlene said.

Environmental consultant Rene Borromeo, 36, said this prompted him to call up friends and fellow UPLB alumni to gather resources for the victims’ families.

He said what he and some UPLB alumni started as a Facebook group page under the name, Task Force Given Grace (TFGG), became a “movement” that carried an advocacy against crimes and violence against women.

“What I had in mind was just to raise something like P5,000 for the family’s expenses. But the others started suggesting and organizing the events. The UPLB community also responded to our cause,” Borromeo said.

The TFGG on Sept. 1 organized a benefit concert in Makati. Their next activity would be a run in UP Diliman on Oct. 7 and all proceeds from concert tickets and registration fees would be donated to the families of the three victims.

Biker Erwin Rili, 43, from San Pablo City, said the event would also help raise the community’s awareness not only in this town but also in other areas where crimes take place every day.

“This [also] helps make the other bikers [from San Pablo City and Sta. Cruz] feel that it is still safe to go to Los Baños,” said biker and TFGG volunteer Grant Leceda, 41.

UPLB and the local government imposed tighter security measures immediately after the murders.

“We are keeping up with those measures like the curfew and liquor ban. Some people hated us for those but we want them to understand that we are doing these for their own safety,” said Los Baños Vice Mayor Josephine Sumangil-Evangelista, who also rode her bike during the event.

Borromeo said more than the funds, the objective was to keep reminding the Los Baños community that justice has yet to be given to these victims.

He remembered, “I was a freshman when the Sarmenta-Gomez [slay] happened and I saw how students stepped out of their dormitories and rallied with torches every day until [former Calauan mayor Antonio] Sanchez was convicted.”

“We just wanted that same [level of] response from the community in achieving justice,” he said.