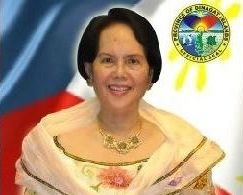 Dinagat Governor Glenda Ecleo faces challenge from her daughter Geraldine in the local polls next year.

SAN JOSE, Dinagat Islands, Philippines – Dinagat’s legal status as a province may have been finally settled by the Supreme Court with finality, but the new province is bracing for a political showdown brewing among the members of its prominent political family—the Ecleos.

Vice Governor Geraldine “Jade” Ecleo earlier declared she would contest the reelection of her mother, second-termer Gov. Glenda B. Ecleo, in the May 2013 elections.

The Liberal Party has sworn in the younger Ecleo last week, making her the administration’s focal figure in 2013 in Dinagat. Her mother is affiliated with the Nacionalista Party of Sen. Manuel Villar.

“I’m all set to run against my mom in next year’s elections,” said the young Ecleo, who became Dinagat’s first elected governor when these collections of islands north of Surigao del Norte became a province in 2006.

“And I’m running with the best of intentions— to liberate our people from poverty and provide alternative leadership which the Dinagatnons have been deprived of in these past few years,” she added.

This stinging rebuke of her mother’s leadership in the province capped the younger Ecleo’s tumultuous— often public —feud with her 72-year old mother and siblings, who has been holding various elective positions throughout the island.

Glenda, in her public speeches, has branded her daughter as insolent and hardheaded.

Jade has railed in public about her family’s “excesses,” somewhat a taboo for an Ecleo, a surname that has long commanded respect, if not religious reverence, among the faithful of the Philippine Benevolent Missionary Association (PBMA), founded by the patriarch Ruben Ecleo, Sr.

Twenty-five years after his death, Ruben Sr. remains a deeply revered figure among the PBMA faithful, whose votes are crucial for the family’s political hegemony in the island. Here, it is not uncommon to hear locals imploring the blessing or help of the “Divine Master,” Ruben Sr., as any Catholic would implore on Jesus or the revered saints.

But Jade has bewailed, that her siblings have soaked themselves up with this residual reverence “without responsibility.”

“When you’re an Ecleo you’re automatically identified as a leader, whether you are capable or not,” said the younger Ecleo.

“I want to change that notion. I want the people to choose their leaders based on their capabilities, not on their surnames,” she added.

This was why she enlisted Akbayan Partylist Rep. Kaka Bag-o— a native of Loreto town and whose party is in coalition with Liberal —to run for the province’s lone congressional seat, she said. The post was held by her elder brother, Ruben Ecleo Jr., until the latter was expelled by the Lower House following his conviction of corruption and parricide early this year.

Ruben Jr.’s imprisonment and subsequent convictions have also become a source of disagreement between Jade and her family.  While her mother and siblings have kept their silence on Ruben Jr.’s status as a fugitive, Jade has publicly called on her brother to surrender.

“If you have a brother who is a fugitive, and sickly at that, will you tell him to go on hiding?” she said, suggesting that her mother and siblings would rather want the ex-congressman to remain at large.

“But I’m being misunderstood here. I want him inside a prison cell so that he can be taken care of, so that he may have a chance to live again as a free man,” she added.

As his father’s spiritual heir to the PBMA, Ruben Jr. is widely respected among the faithful, and his words— including whom to vote for in elections —are deemed final.

At a fiesta speech in the island village of Boa, Jade did not mince words as she warned her family against using Ruben Jr.’s influence in the PBMA.

“I can see that they will use my brother’s name for political gain. But the association (PBMA) has nothing to do with elections,” she told the members of the local PBMA chapter. “Elections have everything to do with your welfare and, therefore, choose the leaders who have shown the ability to alleviate your plight.”

The Supreme Court has ruled with finality that the law creating Dinagat Islands province out of Surigao del Norte in 2006 was constitutional.

The high court denied the motion for reconsideration filed by Surigao political leaders Rodolfo Navarro, Victor Bernal and Rene Medina, which asked the high tribunal for the reinstatement of its Feb. 10, 2010, ruling that Republic Act No. 9355, which created the country’s 80th province, was unconstitutional.

On April 12, 2011, the Court reversed itself and declared RA 9355 valid. The reversal was described by critics as “flip-flopping” and accused the Court, which was dominated by appointees of ex-President Gloria Macapagal-Arroyo, of favoring Governor Ecleo and Ruben Jr., who were members of the former ruling administration party Lakas-Kampi-CMD.

“The Court resolved to deny with finality the said motion for reconsideration as no substantial arguments were presented to warrant the reversal of the questioned resolution,” stated the high tribunal’s Sept. 11 resolution signed by Supreme Court Clerk of Court Enriqueta Vidal.