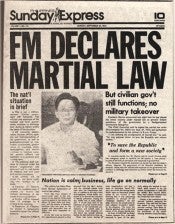 Showing the speech in full will ensure the public will “never forget” the atrocities during Marcos’s rule, which was marked by widespread human rights abuses that saw hundreds of activities killed, jailed or abducted by the dictator’s forces, the office of President Benigno Aquino said.

The speech is to be aired on government’s official interactive portal (www.gov.ph) as well as the website of ABS-CBN television, the country’s leading private broadcaster once padlocked by the Marcos regime.

“It’s a very nice resource for you to understand and to be aware of what happened in those times,” presidential spokeswoman Abigail Valte said.

“So we encourage everybody to go visit the website.”

The video was from the archives of ABS-CBN and will be made available to the public beginning Sunday evening “exactly 40 years to the date and time of the original broadcast in 1972,” the government said.

The government has also posted online contents of Marcos’s personal diary, giving a rare glimpse into the mind of the dictator as martial rule unfolded.

Marcos signed the martial law order on September 21, 1972, but officially announced it to a shocked Filipino public two days later.

Newspapers and television stations critical of Marcos were shut down or taken over, while critics and political opponents were killed.

In his diary, Marcos wrote how his forces immediately arrested 52 personalities out of 200 targets, which included opposition figure senator Benigno Aquino – father of the current president.

“At 7:15 p.m. I finally appeared on a nationwide TV and radio broadcast to announce the proclamation of martial law, the general orders and instruction,” Marcos wrote.

“I was supposed to broadcast at 12:00 p.m. but technical difficulties prevented it. We had closed all TV stations.”

Aquino was subsequently allowed to leave the country to seek treatment in the United States for his ailing heart, but was shot at the tarmac of the airport in 1983 upon returning him.