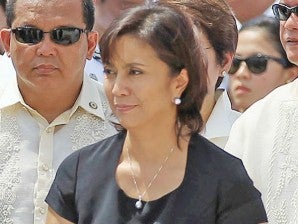 NAGA CITY, Philippines – Maria Leonor “Leni” Robredo, widow of former Interior Secretary Jesse Robredo, is to take over the chairmanship of the Liberal Party in Camarines Sur, which was left vacant by the death of her husband, a local party official revealed Saturday.

Robredo accepted the LP provincial post upon the prodding of President Aquino and newly appointed Interior Secretary Mar Roxas, according to Alberto Bercasio, treasurer of the LP in Camarines Sur.

Bercasio said Robredo, a lawyer, has temporarily shelved her plan to enter the judiciary until after the 2013 midterm elections in order to focus on party work with the LP in the province.

The Judicial and Bar Council shortlisted Robredo for the position of a Regional Trial Court judge in Bicol a few days after her late husband was cremated and interred.

Jesse Robredo, along with the two pilots, died in a plane crash off Masbate City on August 18. Only his police security aide survived.

Robredo’s body was found in the plane’s wreckage on August 21. He was laid to rest on August 28 in a state funeral held in this city, where he was mayor for 19 years.

Bercasio said Robredo was chosen to lead the LP in Camarines Sur because the party leadership believed she was the only one who could unify local party members.

Robredo will oversee the party’s local chapter and act on party concerns, finalize the line-up in the elections and sign certificate of nominations of LP candidates in Camarines Sur, he said.

Among the sure party candidates in the province is actor Aga Muhlach, who will run for the congressional seat in the fourth district against William Felix Fuentebella.

In the fifth district, the LP standard bearer will be reelectionist Representative Salvio Fortuno, who is expected to be challenged by three-term congressman Felix Alfelor Jr.

Outgoing Camarines Sur Gov. Luis Raymund “LRay” Villafuerte also intends to join the fray in a three-cornered fight for a congressional seat in the second district.

Bercasio said they would decide on Sept. 28 who between former Solicitor General Anselmo Cadiz and Naga City Vice Mayor Gabriel Bordado will represent the third district, a position now held by last-term Rep. Luis Villafuerte, the estranged father of the governor.