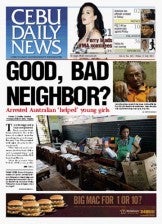 Their account about being enticed to live in the house of an elderly Australian in exchange for sex in barangay Inayagan, Naga City, prompted child rights advocates to file a case in April.

“They did not receive any money, just free food, clothes and accommodation,” said lawyer Joan Suarez of the Children’s Legal Bureau.

When the parents later backed off the case, police watched the house again for a month.

Last Wednesday night, armed with a search warrant, they raided the bungalow and rescued four other teenage girls.

Charges of child abuse are being prepared against 78-year-old Angelo Farina, who was arrested and detained in the Naga municipal jail.

Farina, who is Italian by descent, cursed at news reporters and refused to be interviewed.

He was attended to in jail by a househelper and sympathetic neighbors, who said the foreigner was a generous man, who has sent many local girls to school.

They said Farina had lived in Naga for almost 16 years with his wife, a Cebuana from the barangay.

The couple separated some years ago, and the wife is now in Australia with their daughter. But Farina would still come in and out of the country.

They said he was retired and was receiving a government pension.

But Naga police said they found evidence of “sexual activity” in the house, after they searched the premises, including photographs of Farina and young girls in a compromising position.

His passport, which showed he was an Australian citizen, was confiscated, along with two syringes, vials and drugs that have yet to be identified.

Suarez of the CLB said they are checking whether the girls’ parents knew what was going on.

The four rescued girls were turned over to the Dept. of Social Welfare and Development.

“The presence of the girls (in the house) is our evidence itself,” said lawyer Noemi Truya-Abarientos of the CLB.

Under Republic Act 7610 or the Anti-Child Abuse Law, it is unlawful for a person who is not a relative of a child to be alone in the company of the minor in a room, house, hotel or other establishment under circumstances that could lead a reasonable person to believe the child would be exploited for prostitution or sexual abuse.

Yesterday morning, the mothers of the rescued girls trooped to the Naga police station to ask for their children.

They didn’t express anger at Farina. Some said they couldn’t believe he was in jail or that he was molesting girls.

The mother of a 16-year-old girl who was found in Farina’s house said the foreigner has been helping her and other mothers send their children to school.

“He is a good man,” said the laundrywoman.

The women didn’t sound indignant about having their young daughters spend nights alone with Farina in his house. Two mothers confirmed the sleepovers.

The women were more anxious about their daughters in the custody of the DSWD.

“What will happen to their studies, their meals, their clothing?” asked one parent, who was told the girls had to undergo stress debriefing by trained social workers.

The mother of a 15-year-girl said she pitied Farina.

“Poor Angelo, he’s not guilty of any of that,” she said in Cebuano.

The teenagers are mostly public high school students who reportedly did household chores like cleaning the lawn and the house.

Naga City Mayor Valdemar Chiong commended the Naga police for handling the arrest after one month of surveillance.

“This is a major achievement for our policemen. They were in the forefront in conducting this operation. This is a result of our active coordination with the Children’s Legal Bureau,” Chiong told Cebu Daily News.

Police had to travel a narrow dirt road to reach the house in the interior of the barangay.

Suarez of CLB said they had been watching the house in April after receiving complaints from two sisters living in Farina’s house who said they were sexually abused.

The CLB earlier filed child abuse charges against Farina but the parents of the children didn’t pursue charges after they were reportedly paid P20,000 to sign an affidavit of desistance.

Farina reportedly left the country after the case was dropped. He returned around June.

Since then, the CLB coordinated with the local police for surveillance.

She said Cebu needs to be vigilant about the entry of foreigners engaged in pornography and eyeing minors for sex, especially in poor communities. With a report by Reporter Ador Mayol