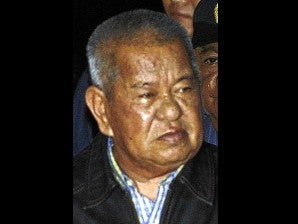 COTABATO CITY, Philippines – More than 80 persons, including former Maguindanao governor Andal Ampatuan Sr. and other members of his clan have been charged with multiple murder in the Maguindanao prosecutor’s office.

Rodolfo Yanson, Maguindanao prosecutor, said the complaint, which was filed on August 29 but which he disclosed only on Friday, involved the massacre of eight people, including a Moro rebel surrenderee, in the town of Shariff Aguak town on Aug. 8, 2008.

Yanson said he has directed the Ampatuan patriarch and the 86 other accused to answer the complaints by the son and wife of Datu Itaw Gayun, a former Moro National Liberation Front commander.

Yanson said that according to the complaint, Gayun and seven of his farmhands were working in Barangay (village) Takepan in Shariff Aguak when more than 70 armed men identified with the Ampatuan clan arrived and peppered them with bullets.

A witness, identified as Kamad Makakua Duma whom the Gayun family had secured, said the armed men were led by Datu Kanor Ampatuan. Duma claimed he and other villagers helped bury Gayun and the other victims.

But Benzar Ampatuan, spokesman of the Ampatuan clan and current mayor of Mamasapano town, said the new complaint was politically motivated. He said while only Kanor was identified by the witness, Andal and other Ampatuan clan members were included.

“We will file our counter affidavit soon. Hopefully the truth will come out. This is politically motivated,” he told reporters.

Benzar said the filing of the charges also came as the filing of certificates of candidacy for elective local posts for next year’s election was nearing.

The Ampatuan clan ruled Maguindanao for more than three decades and its members have been accused of various forms of abuses ranging from land grabbing and killings.

Their iron grip on the province came to an end with the murder of 58 people, including 32 journalists and media workers, as well as members and supporters of the Mangudadatu clan, in November 2009.

What was to become known as the Maguindanao Massacre  was part of the clan’s efforts to prevent Esmael Mangudadatu, then vice mayor of the town of Buluan, from wresting power from the Ampatuans.

The killings did not deter Mangudadatu in pushing his bid for the province’s governorship. He won the election while many of the Ampatuans were arrested and jailed for the 2009 massacre.

The cases against them in connection with the Maguindanao Massacre remain unresolved to this day.