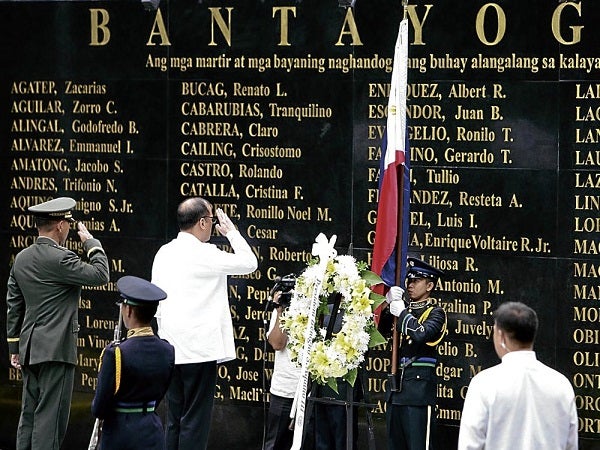 THE HONOR ROLL. President Aquino, accompanied by AFP Lt. Gen. Reynaldo Mapagu, salutes the heroes and martyrs who died fighting the martial rule of Ferdinand Marcos during the 40th anniversary memorial rites of its declaration, at the Bantayog ng mga Bayani in Quezon City on Tuesday. There are many other martyrs who remained unknown. MARIANNE BERMUDEZ

Decrying attempts to recast martial law in a good light, President Benigno Aquino III on Friday ordered state historians to compile stories of the survivors for the sake of the youth who have no memory of that dark period.

As the country marked the 40th anniversary of the proclamation of martial law on Sept. 21, 1972, the President expressed disbelief at the lingering perceptions of some Filipinos that the 13-year-long martial rule of the dictator Ferdinand Marcos did the country good.

Mr. Aquino highlighted the key points of martial rule to refresh people’s memories in the face of what he sees as attempts by propagandists and revisionists to cast it in a positive light.

“To ensure that the information we’re passing on to the youth is based on a truthful event in our history, I have directed the National Historical Commission of the Philippines to form a committee” that will compile the experiences and stories of the individuals who lived through that period, he said.

The committee will include families of martial law victims and government officials, he said.

“We want to ensure that the source of information in students’ books will be the truth, not falsehoods pieced together by the propagandists, and not bits of deception by the revisionists,” he said.

The President offered a wreath at, and saluted, the Bantayog’s Wall of Remembrance to honor the countless individuals who died and disappeared fighting the dictatorship.

“There’s a saying that those who forget the errors of the past are bound to commit them. Let’s not allow our rights and freedom to be at risk again,” Mr. Aquino said.

“I will not allow the errors of history to be passed onto the next generation. Let’s treasure the lessons of martial law,” he said.

“I don’t want you to experience the difficulties and sacrifices my father and other victims of martial law went through,” he said.

The President’s father, former Sen. Benigno “Ninoy” Aquino Jr., the leader of the anti-Marcos opposition, was assassinated on Aug. 21, 1983, on the day he returned from exile in the United States.

The President said he could not believe that some Filipinos would hold the view that life was “much better” during Marcos’ martial rule, even saying that had it been extended, the country would be more progressive.

While he respected such views, he said: “Can they answer us and look at us straight in the eye if we ask them: Did something good really come out of martial law?”

“If martial law was the right solution to crime, how come Marcos’ rule was marked by disappearances, salvaging and summary executions?” Mr. Aquino asked.

Blind to the horrors

“Is this the new society that they promised? Judge it for yourself,” he said.

Mr. Aquino lamented that 40 years later, the public “remained blind” to the horrors of martial law, including the fact that while Marcos signed Proclamation No. 1081 on Sept. 21, 1972, he only announced its imposition two days later.

In those two days, Marcos had his bitter critics arrested, he said.

“This is the reason why my father was arrested on Sept. 22, as well as other personalities and civilians who were viewed as threats to the regime Marcos was forming. Unknown to the public, on that same day, Marcos issued his most atrocious order as a dictator: General Order No. 1, which placed all powers and operations of the government directly under one man: Mr. Marcos,” the President said.

Marcos justified his order by citing rising criminality and a worsening rebellion, he said.

“I was only 12 years old then, and had no idea what impact September 1972 would have on our family. Yes, I noticed that my father was listless before the declaration of martial law, but as a young boy, I didn’t give it much thought,” he said.

Soon after, checkpoints would be set up, and newspapers and radio stations would be shut down. Marcos would write his own Constitution, and when he felt this would not prosper in a plebiscite, he had this approved by mere “raising of hands” in every barangay, Mr. Aquino said.

Through this Constitution, Marcos removed the powers of Congress and the Supreme Court, vesting himself with all the powers of the state, he said.

On April 6, 1978, the eve of the elections of the Interim Batasang Pambansa, many Filipinos joined a massive noise barrage to support the elder Aquino’s party. While Aquino and his partymates lost, the protest kicked off a series of demonstrations in schools, public squares and government offices, he said.

Responding to international criticism, Marcos lifted martial law in 1981, but he still held the powers of the state. The situation came to a head in the elder Aquino’s assassination in 1983 that sparked the February 1986 People Power Revolution that ousted Marcos.

“I just want to clarify. We recovered democracy not because of the assassination of my father, but by the hundreds of heroes who risked their lives to fight for the rights of the oppressed,” he said.

Read Next
If arrested, do a ‘Bien’
EDITORS' PICK
Duterte orders review of conduct of war on drugs
No evidence to warrant filing of homicide case vs Julian Ongpin – police
Smart powers Liga Adarna Season 4: Race to the Top
Miss Universe Philippines partners with JC
Who is Julian Ongpin?
Rabiya Mateo admits dating an older man and jokes: ‘Tatay pala ‘yung hinahanap’
MOST READ
LOOK: Angel Locsin inspires with weight loss progress
Gordon: Senate uncovered ‘mother of all corruption’ under Duterte admin
Gordon dares Duterte to prove he pocketed PDAF given to Red Cross
Who is Julian Ongpin?
Don't miss out on the latest news and information.