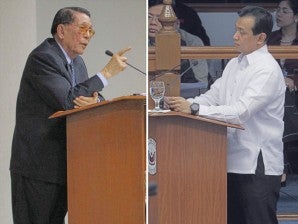 PHANTOM OF THE OPERA. Enrile accuses Trillanes, who reportedly volunteered to negotiate with China, of being a ‘fraud’ and a ‘fifth columnist,’ or traitor. Enrile said he was out to unmask the ‘Phantom of the Opera’ of Philippine politics. LYN RILLON

MANILA, Philippines – Senator Antonio Trillanes IV confirmed on Thursday that he was behind the ouster move against Senate President Juan Ponce-Enrile.

“Yes and I haven’t stopped working and hoping for it,” Trillanes told INQUIRER.net in a text message.

“He has lost his moral authority to lead the Senate when he continued to collaborate with GMA,” he said, referring to former President and now Pampanga Representative Glora Macapagal-Arroyo.

Enrile himself said Wednesday night that Trillanes was behind the ouster mover against him.

Asked if he has convinced any senator to join the ouster move, Trillanes said, “No comment.”

Sought for reaction, Enrile said he was not bothered as he was ready to be ousted from his post anytime.

“It doesn’t matter to me if I’ll be ousted today,” the Senate leader told reporters.

“He can go around. It doesn’t matter to me. Let the people judge,” he said.

“It’s not of my interest and I don’t care whether he’s talking to anyone. He can go ahead and if he wants to elect himself as Senate President, by all means,” Enrile added.

He also dismissed rumors that his group, the Nacionalista Party being headed by Senator Manny Villar, such move against Enrile.

Trillanes bolted the majority bloc Wednesday to join the minority group in the Senate after accusing Enrile of railroading a bill, seeking to divide the Camarines Sur province.