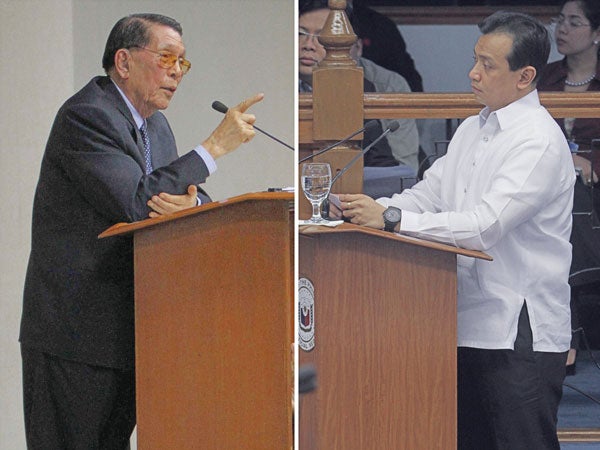 PHANTOM OF THE OPERA Enrile accuses Trillanes, who reportedly volunteered to negotiate with China, of being a ‘fraud’ and a ‘fifth columnist,’ or traitor. Enrile said he was out to unmask the ‘Phantom of the Opera’ of Philippine politics. LYN RILLON
GLORIA’S LACKEY Trillanes says Enrile is working for former President Arroyo, ‘bullying’ senators to force passage of the bill dividing Camarines Sur into two provinces. He announced he was quitting the majority in the Senate because he had lost faith in Enrile’s leadership. NIÑO JESUS ORBETA

Senate President Juan Ponce Enrile on Wednesday disclosed notes written by Philippine Ambassador to China Sonia Brady that he said showed Sen. Antonio Trillanes IV was working for Beijing in the dispute between the Philippines and China over Panatag Shoal in the West  Philippine Sea.

On the day  the Philippine Daily Inquirer in an exclusive report outlined the emergence of Trillanes as President Benigno Aquino’s back-channel negotiator working independently of the Department of Foreign Affairs (DFA), Enrile read into the Senate record  Brady’s purported notes of a meeting with the junior senator.

This followed a rare clash on the Senate floor before a national TV audience when Trillanes, who walked out  as Enrile was interpellating him, accused the Senate President of being a “lackey” of former President Gloria Macapagal-Arroyo.

The Senate President ticked off 20 items in the Brady notes, including a point Trillanes purportedly said that in the Philippines “no one cares” about Panatag Shoal (Scarborough Shoal), where Manila had a  confrontation with Beijing in April when the Philippine Navy intervened to stop the poaching of endangered marine species and corals by Chinese fishermen.

“I do not want to discuss anymore this sordid matter. It is enough that I read the notes of Ambassador Brady to unmask this ‘Phantom of the Opera’ in Philippine politics. My God, this guy is a fraud.”

He also called Trillanes a “fifth columnist”—referring to a clandestine force in Madrid supporting rebels from within—before he walked off the rostrum.

The harsh exchanges between Trillanes and Enrile revealed deep divisions in the conduct of Philippine diplomatic initiatives in the standoff with China.

Foreign Secretary Albert del Rosario, in a series of interviews with senior Inquirer reporter Gil Cabacungan, complained that “while back-channeling has its purpose, it’s doing more harm than good.” He said that it was important that “we speak with one voice on this matter.”

In the interviews, Trillanes accused Del Rosario of drawing the United States into the dispute that he said tended to exacerbate tensions instead of ease them.

On Wednesday, Del Rosario issued a curt message, saying he would not dignify accusations by Trillanes.

“The DFA executes the foreign policy of the President. We will not dignify those who are working to divide us,” Del Rosario said.

In a privilege speech on Camarines Sur, Trillanes decried Enrile’s alleged “bullying” of other senators just so the Senate would approve the controversial bill dividing Camarines Sur into two provinces.

He said Enrile was either “deeply indebted to” or a “lackey” of Arroyo. He said Arroyo had “personally called up” the Senate President to ask that he “speed up the measure.”

Enrile accused Trillanes of trying to control the damage wrought by the Inquirer report. He said Trillanes delivered a privilege speech on the Camarines Sur bill to “camouflage” his mistake.

According to Enrile, the items in the Brady report dated Aug. 17 purported to show:

Before Enrile took out Brady’s notes, he and Trillanes engaged in a heated debate following the younger senator’s speech.

Raising the bullying charge, Enrile asked whether there had been any instance when he asked Trillanes “to vote according to my wishes.”

“You’re telling falsehoods here. You are angry at me because you asked me for an additional budget in your oversight committee and I did not allow it,” the Senate President revealed.

Enrile also recalled that after Trillanes won a Senate seat while incarcerated in Camp Crame for leading the Oakwood mutiny in 2003, he “went out of my way to talk to people to guarantee your presence in the Senate” in an effort to convince authorities to free Trillanes.

Enrile said Trillanes apparently resented his question during a Cabinet meeting in May on who authorized Trillanes to talk to the Chinese.

“The President told it to your face,” Trillanes said, referring to his special envoy status given by Malacañang.

“Wasn’t it your duty to notify the Office of the Senate President when you leave this country?” I don’t know how many times you have been to China but I recall six times?  I am now hearing reports you were there 15 times,” Enrile noted.

“Are you becoming the fifth columnist of China in this country? Who paid for those trips to Beijing?” he then asked Trillanes.

Enrile then showed the Brady notes and asked whether Trillanes would want him to read them.

“Those might reveal sensitive information on foreign relations and national security,” Trillanes warned.

“Do not teach me about proceedings,” Enrile answered in a raised voice.

At this point, Trillanes walked out of the session hall.

“He’s a coward.  Senator Trillanes even instructed Mrs. Brady not to take notes,” Enrile said and began to read from the ambassador’s report.

“The Senate President may reveal sensitive information pertaining to foreign relations and national security and I believe it is out of order,” Trillanes had warned the floor.

Trillanes said his trips to China were authorized by President Aquino.

“Either way, I have lost trust, faith and confidence in Senator Enrile’s capability to lead the Senate along the path consistent with the reform agenda that I espouse,” he added.

Trillanes, a member of the Nacionalista Party, said he was leaving the majority coalition in the Senate and joining the minority.