What triggered Trillanes to storm out of the Senate 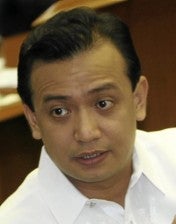 MANILA, Philippines – Senator Antonio Trillanes IV on Wednesday stormed out of the session hall at the height of a heated interpellation by Senate President Juan Ponce Enrile after the first-term senator accused the long-time legislator of being a lackey of former President Gloria Macapagal-Arroyo.

Trillanes folded his documents and left the session hall after Senate President Pro Tempore Jinggoy Estrada ruled against Trillanes’ point of order—that Enrile was about to reveal sensitive information on foreign relations and national  security—and allowed Enrile to discuss Trillanes’ trips to China.

“The Senate President may reveal sensitive information pertaining to foreign relations and national security and I believe it is out of order,” Trillanes told Estrada when asked what his point of order was against Enrile.

“Do not teach me about parliamentary procedure. I’m not answerable to anybody about what I say in this hall,” came Enrile’s retort.

“The Senate President may proceed,” Estrada said after banging the gavel once.

Enrile proceeded with his revelations as Trillanes turned around to leave.

Trillanes earlier said that his trips to China were authorized by President Benigno Aquino III.

“I have already informed the people.  I’m not obliged to inform the Senate President and all this line of questioning is irrelevant again.

And should this line of questioning continue I will have to say that I will refuse to yield anymore,” Trillanes said.

Trillanes initiated the exchange when in a privileged speech he accused Enrile of being a lackey of former President and now Pampanga congresswoman Arroyo. She allegedly put pressure on the long-time legislator and Senate leader to facilitate the creation of a new province from areas in Camarines Sur.

Trillanes charged Enrile of sitting on proposed legislation that he doesn’t favor such as the Reproductive Health Bill of Sen. Pia Cayetano while railroading those that he wants passed such as the creation of Nueva Camarines.

“What, the great Senator Enrile could be pressured? I remember him saying otherwise, during the last impeachment proceedings,” Trillanes said.

He said Villafuerte was often seen “loitering” in the senators’ lounge, at the Senate President’s office and “even personally lobbying to senators while we are in session.

Trillanes said a newspaper report that said Arroyo called Enrile to “speed up the measure” was validated by another senator.

“With this totally unexpected twist, everything seemed to fall into place. Now, there remain only two possibilities: that our Senate President is deeply indebted to GMA (Gloria Macapagal Arroyo_; or that he is a GMA lackey,” Trillanes said.

“Either way, I have lost trust, faith and confidence in Senator Enrile’s capability to lead the senate along the path consistent with the reform agenda that I espouse,” he added.

Trillanes, a member of the Nacionalista Party, then said he was leaving the majority coalition in the Senate and joining the minority led by Senate Minority Leader Alan Peter Cayetano.

Trillanes said Enrile called a caucus on the passage of the Camarines law on July 24, the day after President Aquino’s state of the nation address.  He indicated that he tried to oppose the measure but was “shoved aside for the nth time.”

“Eto na naman po, ‘kung gusto ko, isasagasa ko.’ I got out of that caucus feeling trampled upon by a bully determined to get his way. My neophyte instincts were telling me then to just keep the peace and get out of his way. But then, the public servant in me just couldn’t let this thing pass,” Trillanes said.

Trillanes said that as a matter of public policy, dividing provinces or carving out new ones was not beneficial to the state or the people of the affected province.

“Otherwise, let’s just divide all the big provinces for as long as they meet the requirements as provided for in the law and we’ll probably end up with around 200 provinces in total,” Trillanes said

Trillanes said there could be a few exceptions “when there are two distinct and warring tribes occupying one province or; when a province is composed of two large islands that are administratively cumbersome.”

“But in the case of Camarines Sur, neither of these conditions is present,” Trillanes said.

Trillanes said there is the cop-out argument that the people should decide.

“I’ve heard this from the Senate President several times that I was almost convinced that he actually believed it. Almost, because if he really does, then I would immediately initiate the division of his

Cagayan province and expect from him the same zeal and vigor that he has in rushing this bill,” Trillanes said.

Trillanes said the Camarines bill was “gerrymandering in its worst kind, particularly, one that would provide for new elective positions to accommodate two three-term congressmen.”

“But if it were so, why would our Senate President be particularly interested to the point of straining relations with members of the very Senate that he leads?” Trillanes said.

“Worse, our Senate President didn’t even cancel the session at the height of the habagat (southwest monsoon) rains when all government agencies already did, just so this bill could be tackled,” he added.