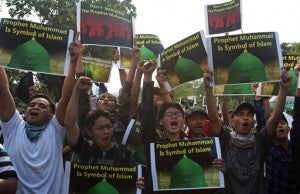 Indonesian Muslims shout slogans as they hold a banner which reads “Prophet Muhammad is symbol of Islam” during a protest against an anti-Islam film that has sparked anger among followers, outside the US Embassy in Jakarta, Indonesia on Sept. 14, 2012. YouTube has begun restricting access to videos of an anti-Islamic film in the world’s most populous Muslim nation, a government official said Sunday, Sept. 16, 2012. AP PHOTO/ACHMAD IBRAHIM

JAKARTA, Indonesia—YouTube has begun restricting access to videos of an anti-Islamic film in the world’s most populous Muslim nation, a government official said Sunday.

“Google, which is YouTube’s parent company, e-mailed us on Thursday evening to say it had blocked Indonesia’s access to 16 URLs related to the ‘Innocence of Muslims’ videos on the site,” Communications and Information Ministry spokesman Gatot Dewa Broto told AFP.

Extracts of the film were still available on the video-sharing website on Sunday, but Broto said Google was “making special effort” to prevent the film from being watched in Indonesia.

“We understand that it takes time for Google to block everything as people continue to upload those sensitive videos. We appreciate Google’s cooperation,” he said.

Broto said the government also wrote to Blackberry maker Research In Motion on Friday to filter the videos on its smartphones.

Indonesia is the Canada-based company’s biggest market outside North America, with subscriptions expected to almost double to 9.7 million by 2015.

“We could access the videos on Blackberry too so we wrote to RIM to ask that it filter them, and RIM has been very cooperative,” he added.

Besides Indonesia, Google has denied access to the video in Libya, Egypt and India.

In cities across the Muslim world protesters have vented their fury at the “Innocence of Muslims” – an amateur film produced in the United States – by targeting symbols of US influence ranging from embassies and schools to fast food chains.

Hundreds of Indonesians staged rallies against the United States on Friday and Saturday over the film, which portrays the Prophet Mohammed as an immoral sexual deviant.

In the worst violence triggered by the film, the US ambassador to Libya, Chris Stevens, and three other Americans were killed late Tuesday when suspected Islamic militants fired rocket-propelled grenades at the US consulate in Benghazi.