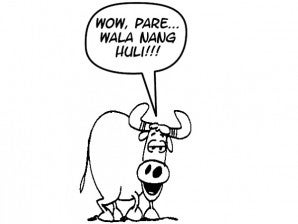 A lawmaker is thrilled to have discovered a huge pot of gold in the illegal herb marijuana right in his home province and expressed his desire to legalize it “for the benefit of our farmers.”

While upland farmers of Benguet take pride in their fresh, plump vegetables, Benguet Rep. Ronald M. Cosalan seems to be especially proud of this herb.

“The boundary between Benguet and La Union is the source of the purest marijuana in Southeast Asia,” said Cosalan.

If veggies go down

“If the vegetable industry goes down, I might have to file another bill to legalize marijuana for the benefit of our farmers,” he said in jest at the launch of the Department of Agriculture’s Agri-Pinoy Trading Center Program in Quezon City on Friday.

During the program, Benguet Gov. Nestor Fongwan said vegetable farmers in the mountainous province were beset with many challenges—from importation of vegetables to rampant smuggling.

Asked to explain his basis in saying that Benguet-grown marijuana is pure, Cosalan told the Inquirer: “I only learned it from marijuana users.”

According to the World Drug Report 2011 of the United Nations Office on Drugs and Crime, the cannabis herb in the Philippines, listed as one of the “major producing countries,” typically involves 100-percent purity levels of THC (tetrahydrocannabinol), the psychoactive agent in the drug.

In the country tally, only the Philippines registered that purity level as of 2009, the most recent available figure. The report monitored low prices for marijuana in the country at less than $1 per gram and, typically, $419.2 per kilogram.

Cosalan said he could not give a rough estimate of how large a marijuana industry Benguet and neighboring provinces have.

“I don’t know if we can call it an industry but I know it’s in the millions (of pesos),” he said.

Cosalan said the boundary of Benguet and La Union is of particular interest, because aside from a national highway, the area is virtually deserted.

“I know this because I live on the side of the national highway near a police checkpoint. So I know that many people get caught trying to transport marijuana,” Cosalan said.

There have been previous attempts in the House of Representatives to legalize marijuana but none has succeeded.

In time, Cosalan said, the stigma might wear off, noting that in some states in the United States, medical marijuana is already permitted.

According to the UN report, cannabis is produced in practically every country of the world, making it the most widely produced illicit drug.