‘Marzans are safe; no flat irons in jail’ 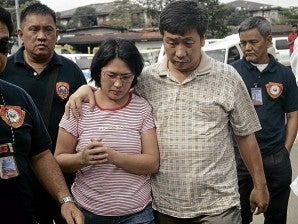 THE MARZANS upon arrival at the city jail on Thursday. MARIANNE BERMUDEZ

Women inmates of the Quezon City jail are not allowed to keep flat irons, so Analiza Marzan can rest easy.

Jail officials yesterday assured the safety of Analiza and her husband Reynold while in detention on charges that they tortured their former maid Bonita Baran for several years until she went blind.

SJO4 Eduardo Cuaresma of the jail’s female dormitory said the Marzans will be safe in detention, a day after some of the inmates were heard poking fun at the incoming detainee before she arrived at the facility on Thursday.

“They cannot have flat irons in their cells. The inmates were probably just taunting the new inmate. But they don’t mean it,” the officer told reporters yesterday.

Some female jailbirds were heard yelling, “handa na mga plantsa namin! (our flat irons are ready!)” shortly before Analiza arrived at around 3 p.m.

It was in apparent reference to Baran’s allegation that Analiza burned her face with a flat iron, among other abuses at the hand of the Marzans.

Cuaresma said Analiza was “quiet” and mostly kept to herself during her first night at the dormitory in Camp Karingal, Barangay Sikatuna Village, where she shares a cell with other women.

Heated arguments among female inmates happen but they hardly lead to violent physical confrontations, he said.

“We use a therapeutic modality here. Women have no gang affiliations,” he added.

Analiza’s husband Reynold stays in a cell of the QCJ building with other inmates who have no gang affiliations. Jail warden Supt. Joseph Vela also assured Reynold’s safety.

Vela noted that Reynold’s cell is the one nearest to his office and thus easy to check. “I also instructed the cell leader to make sure that Reynold would not be touched,” the official said.

On Thursday, Judge Germano Francisco Legaspi of Quezon City Regional Trial Court Branch 77 denied the couple’s bid to be detained at the National Bureau of Investigation headquarters and committed them instead to the city jail.

The Marzans are facing charges of serious illegal detention filed by Baran. Analiza is also charged with two counts of attempted homicide and seven counts of serious physical injuries.