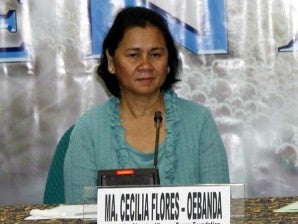 BACOLOD CITY, Philippines—The beleaguered president of the Visayan Forum Foundation Inc. was a former communist leader who fought against the dictatorship in Negros Occidental.

Ma. Cecilia Flores-Oebanda, 53, was known by her nom de guerre– Kumander Liway–when she was a commander of the New People’s Army in the province during the martial law years.

She was a San Sebastian Cathedral catechist in her native Bacolod City, helping the human rights victims when Martial Law was declared in 1972.

She also organized youth leaders who later joined the underground movement in the 1970s.

It didn’t take long for Oebanda to also go to the hills of southern Negros and take up the armed struggle against the dictatorship.

She was eventually captured by the military in September 1982 in Hinobaan town, a known rebel-influenced municipality in  Negros Occidental.

She was detained for five years and was released after the 1986 People Power Revolution that ousted then president Ferdinand Marcos and installed Corazon Aquino to the presidency.

Upon her release, Oebanda went to Manila and started a small business until she organized the VFFI in 1991.

Based on the group’s website, the VFFI is located in 20 provinces and cities with 11 offices in the Philippines and has been involved in the empowerment of vulnerable migrants especially victims of human trafficking, domestic servitude, and other forms of exploitation.

According to the VFFI, their group has helped hundreds of victims of human trafficking, mostly domestic workers and children.

Oebanda, who hails from Barangay Banago in Bacolod City, is a single parent with four children.

Vicente Abadesco, regional coordinator of the VFFI in the Visayas, said the charges of unaccounted funds were unfair and unfounded.

Abadesco, also from Bacolod City, said Oebanda was a kind and simple person.

Former Bacolod Councilor Jocelle Batapa Sigue said she has known Oebanda and her group as the most committed and active organization working against human trafficking and the rights of domestic workers in Bacolod and Negros Occidental. The group has a program in Bacolod City that helps child prostitutes learn how to use computers as an alternative means of livelihood, she said.

“Oebanda was very dedicated to her work, very simple, humble, soft spoken and approachable,” said Sigue, who used to head the Bacolod Gender and Development Council and is presently the executive director of the Anti-Trafficking Legal Society.

Because of her advocacy, Oebanda has been recognized for her advocacy against human trafficking.

Her awards included the 2005 Anti Slavery Award from the Anti-Slavery International, the Skoll Award for Social Entrepreneurship by the Skoll Foundation and the first Iqbal Masih Award for the Elimination of Child Labor given by the US Department of Labor.

Oebanda has been named by the US Department of State as one of its Heroes Acting to End Modern-Day Slavery in its 2008 Trafficking in Persons Report. She was also one of the honorary awardees of the 2011 World’s Children’s Prize for the Rights of the Child and was given the Prix Caritas Award 2011 by Caritas Switzerland for her pioneering and innovative work in the fight against child prostitution, child trafficking and child labor. With a report from Carla P. Gomez and Jhunnex Napallacan, Inquirer Visayas