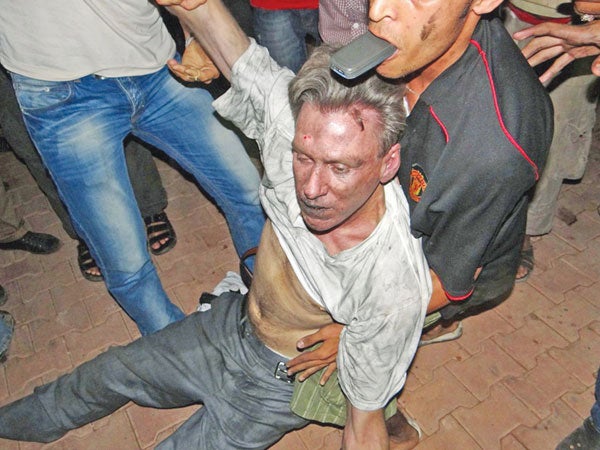 HOW DID HE DIE? Civilians help an unconscious man, identified by eyewitnesses as US Ambassador to Libya Christopher Stevens, at the US Consulate in Benghazi on Tuesday. Stevens and three members of his staff were killed in an attack on the consulate by Islamists outraged by a US-made Internet video allegedly mocking Islam. AFP

BENGHAZI, Libya—The United States dispatched an elite group of Marines to Tripoli on Wednesday after the US ambassador to Libya and three other Americans were killed in a mob attack that reverberated around the world.

US officials were investigating whether the violence was a backlash to an anti-Islamic video with ties to Coptic Christians, or a plot to coincide with the anniversary of the 9/11 attacks.

Tuesday’s stunning attack on the US Consulate in Benghazi poses a daunting task for US and Libyan investigators: Searching for the culprits in a city rife with heavy weapons, multiple militias, armed Islamist groups and little police control.

The one-story villa that serves as the consulate was a burned-out wreck after the crowd armed with machine guns and rocket-propelled grenades rampaged through it. Slogans of “God is great” and “Mohammad is God’s Prophet” were scrawled across its scorched walls.

In Washington, President Barack Obama vowed in a Rose Garden address that the United States would “work with the Libyan government to bring to justice” those who killed Ambassador Chris Stevens, information manager Sean Smith and two other Americans who were not identified. Three other Americans were wounded.

Stevens was the first US ambassador killed in the line of duty in 30 years.

The heavily armed Islamist  militants stormed the lightly defended consulate, killing Stevens and three members of his staff and raising questions about the radicalization of countries swept up in the Arab Spring.

Stevens was missing almost immediately after the start of an intense four-hour firefight, and his body was not located until Wednesday morning at dawn, at a Benghazi hospital.

American and European officials said that while many details about the attack remained unclear, the assailants seemed organized, well trained and heavily armed, and they appeared to have at least some level of advance planning.

But the officials cautioned that it was too soon to tell whether the attack was related to the anniversary of the September 11 attacks.

Fighters involved in the assault, which was spearheaded by a Islamist brigade formed during last year’s uprising against Col. Moammar Gadhafi, said in interviews during the battle that they were moved to attack the mission by anger over a 14-minute, American-made video that depicted the Prophet Mohammad, Islam’s founder, as a villainous, homosexual and child-molesting buffoon.

Their attack followed by just a few hours the storming of the compound surrounding the US Embassy in Cairo by an unarmed mob protesting the same video. On Wednesday, new crowds of protesters gathered outside the US embassies in Tunis and Cairo.

The wave of unrest set off by the video, posted online in the United States two months ago and dubbed into Arabic for the first time eight days ago, has further underscored the instability of the countries that cast off their longtime dictators in the Arab Spring revolts.

It also cast doubt on the adequacy of security preparations at American diplomatic outposts in the volatile region.

“We reject all efforts to denigrate the religious beliefs of others, but there is absolutely no justification for this type of senseless violence. None,” said Obama, who also ordered increased security at US diplomatic posts abroad.

Republican Mitt Romney accused the Obama administration of showing weakness in the consulate killings, but the president retorted that his rival “seems to have a tendency to shoot first and aim later.” Some in the Republican Party called Romney’s remarks hasty.

The mob attack was initially presumed to have been a spontaneous act triggered by outrage over a movie called “Innocence of Muslims” that mocked the Prophet Muhammad that was produced in the US and excerpted on YouTube.

The amateurish video also drew protests in Cairo, where angry ultraconservatives climbed the US Embassy’s walls, tore down an American flag and replaced it with an Islamic banner.

But a US counterterrorism official said the Benghazi violence was “too coordinated or professional” to be spontaneous.

Libya’s new leadership—scrambling to preserve ties with Washington after US help to overthrow Gadhafi—vowed to find those behind the attack. Interim President Mohammed el-Megarif apologized to the United States for what he called the “cowardly” assault, which also killed several Libyan security guards at the consulate in the eastern city.

A Libyan jihadist group, the Omar Abdel-Rahman Brigades, claimed responsibility for a bomb that went off outside the Benghazi consulate in June. The group said at the time that the bomb was revenge for the killing of al-Qaeda’s No. 2, Abu Yahya al-Libi, in a US drone strike in Pakistan.

About 50 US Marines were sent to Libya to guard US diplomatic facilities. The Marines are members of an elite group known as a Fleet Antiterrorism Security Team, or FAST, whose role is to respond on short notice to terrorism threats and to reinforce security at embassies.

The consulate attack illustrated the breakdown in security in Libya, where the government is still trying to establish authority months after Gadhafi’s fall.

The crowd of several thousand that descended on the consulate was armed with machine guns and rocket-propelled grenades, said Wanis el-Sharef, deputy interior minister of Libya’s eastern region.

A small contingent of Libyan security protecting the facility fired in the air, trying to intimidate the mob. But faced with superior size and firepower, the Libyan security withdrew, el-Sharef said. Gunmen stormed the building, looted its contents and torched it, he said.

Details of how the Americans were killed were still unclear.

Stevens, 52, and a consulate staffer who had stayed behind in the building died in the initial attack, el-Sharef said. The rest of the staff successfully evacuated to a nearby building,  he said.

Hours after the storming of the consulate, a separate group of gunmen attacked the other building, opening fire on the more than 30 Americans and Libyans inside. Two more Americans were killed, he said.

Dr. Ziad Abu Zeid, who treated Stevens, said the ambassador died of asphyxiation, apparently from smoke. In a sign of the chaos, Stevens was brought by Libyans to Benghazi Medical Center with no other American, and no one at the facility knew who he was, Abu Zeid said.

He said he tried to revive Stevens for about 90 minutes “with no success.” The ambassador was bleeding in his stomach because of the asphyxiation but had no other injuries.

Widely regarded as one of the most effective American envoys to the Arab world, Stevens brokered tribal disputes and conducted US outreach efforts in Jerusalem, Cairo, Damascus and Riyadh. As a rising star in US foreign policy, he retuned to Libya four months ago, determined to see a democracy rise where Gadhafi’s dictatorship flourished for four decades.

The bloodshed stunned many Libyans, especially since Stevens was a popular envoy among different factions and politicians, including Islamists, and was seen as a supporter of their uprising against Gadhafi. Reports from AP and AFP