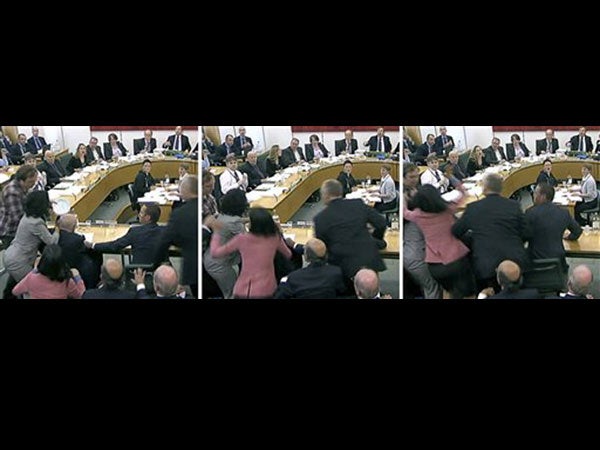 ‘CROUCHING WENDI, HIDDEN DRAGON.’ Wendi Deng, wife of Rupert Murdoch, foreground left, reacts as a protestor, at left in checked shirt , tries to throw a paper plate covered in shaving foam over Rupert Murdoch as he gives evidence to a House of Commons Committee on the News of the World phone hacking scandal. AP Photo.

LONDON  — It was a splat heard around the world.

But two journalists who covered the aftermath of Tuesday’s shaving cream attack on Rupert Murdoch were briefly suspended from working in the British Parliament on Wednesday, after falling afoul of authorities there.

One of those suspended was BBC producer Paul “Gobby” Lambert, who captured the assailant being dragged away by police.

Lawmaker Louise Mensch told the House of Commons that officials had revoked Lambert’s parliamentary pass for breaking strict rules on where journalists can film.

A “Save Gobby” campaign erupted on Twitter, with lawmakers and journalists offering support.

The BBC said it was “looking into this matter with the House authorities” — and officials later said the two men’s passes had been restored.

The office of Speaker John Bercow said that although the journalists had broken the rules, they had done so in “unprecedented and unpredicted” circumstances.