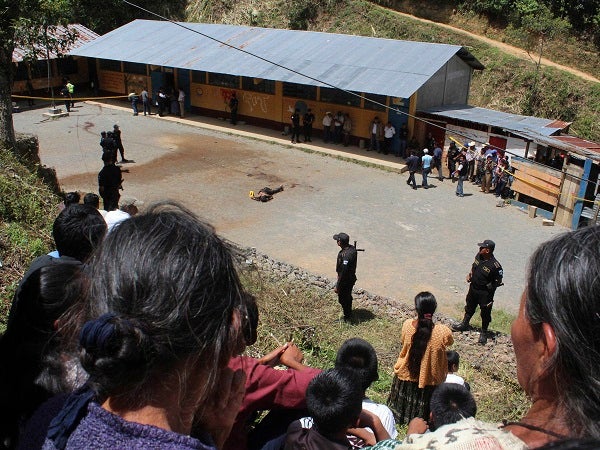 People look at the body of a man who was lynched by a mob inside a public school for allegedly killing two children inside the school in San Juan Tactic, north of Guatemala City, Wednesday, September 12, 2012. Interior Minister Mauricio Lopez Bonilla says Julio Saquil was drunk when he entered an elementary school in the northern province of Alta Verapaz on Wednesday and slit the throats of two children with a machete. Bonilla says a mob then set the 35-year-old man on fire in the school’s patio and he burned to death. AP

GUATEMALA CITY—Outraged residents of an isolated village in northern Guatemala burned alive a man who allegedly was drunk when he killed two children at a local school, authorities said Wednesday.

When residents of the indigenous town of Tac Tic in Alta Verapaz learned that Julio Saquil, 35, apparently hacked the children to death with a machete, they doused him with gasoline and set him alight.

Vigilante justice is common in Guatemala, where the ethnic Maya-language majority often distrust the justice system and the Spanish speaking government in the capital.