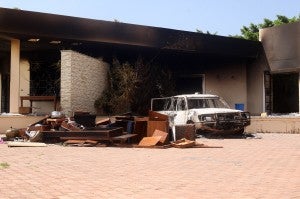 A burnt car is seen after an attack on the US Consulate by protesters angry over a film that ridiculed Islam’s Prophet Muhammad in Benghazi, Libya, Wednesday, Sept. 12, 2012. A number of Libyan security guards were killed and wounded trying to defend US ambassador Chris Stevens, who was killed in the attack, along with three other Americans. AP PHOTO/IBRAHIM ALAGURI

UNITED NATIONS—A number of Libyan security guards were killed and wounded trying to defend US ambassador Chris Stevens during the attack in Benghazi in which the US diplomat died, a Libyan UN envoy said Wednesday.

Ibrahim Dabbashi, Libya’s deputy UN ambassador, told reporters that up to 10 Libyan security personnel were killed and wounded in the attack on Tuesday. “Some of them have been killed at the start of the attack,” he said.