Aquino to leave it up to Roxas to appoint DILG undersecretaries 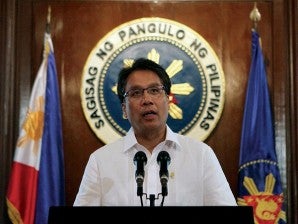 MANILA, Philippines – President Benigno Aquino III is leaving it up to outgoing Department of Transportation and Communications (DOTC) Secretary Manuel Roxas to appoint his undersecretaries in the Department of the Interior and Local Government (DILG).

“I think Secretary Roxas will be the right person to designate his undersecretaries. My only problem is [he] needs to assume his position first before he can designate his people,” Aquino told reporters in an ambush interview Wednesday.

DILG Undersecretary Rico Puno resigned from his post Tuesday “to give a free hand” to the incoming secretary in choosing his own team, he said in a statement.

When asked if Puno will be appointed to a different post in the government, Aquino said “right now it’s under consideration but nothing is confirmed.”

Puno had earlier stated in a televised interview that Aquino was offering him a “nice, quiet job,” but Aquino clarified that it was Puno who was wishing for a “quiet job.”

Puno is being reviewed for allegedly being involved in an overpriced firearms deal in the Philippine National Police (PNP) and for his actions in relation to the securing of the late Interior secretary Jesse Robredo’s offices which included his condominium unit.

Robredo was reportedly conducting an investigation on Puno, which was why he wanted to obtain important documents in Robredo’s places of work.

Aquino said that before he left for the Asia-Pacific Economic Cooperation (APEC) Summit in Vladivostok, Russia, there was already somebody for the post. But after his return he found that the candidate “might not be ready at the required time.”

PNP Chief Director General Nicanor Bartolome was reportedly the prime candidate to replace Puno as undersecretary. He previously stated that he will follow what the president will order.