No word on status of China’s missing next leader 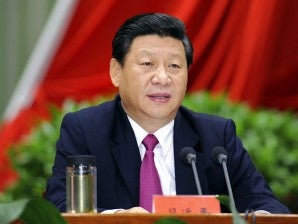 In this photo taken Sept. 1, 2012 and released by China’s Xinhua News Agency, Chinese Vice President Xi Jinping addresses the opening ceremony of the autumn semester of the Party School of the Communist Party of China in Beijing. Chinese micro-bloggers and overseas websites have come up with all kinds of creative speculation as to why President-in-waiting Xi has gone unseen for more than a week. (AP Photo/Xinhua, Li Tao)

BEIJING — A Chinese spokesman on Tuesday said he had no information about the status of leader-in-waiting Xi Jinping, who dropped from sight 10 days ago and has canceled a series of meetings with foreign visitors.

Foreign Ministry spokesman Hong Lei said he had “no information in this regard” when asked about Xi’s condition and whereabouts at a news conference Tuesday.

Asked whether Xi was still alive, Hong replied: “I hope you can ask more serious questions.”

Xi’s absence — and the complete lack of information from the government — has sent the Chinese rumor mill into overdrive, with most speculation focusing on a health crisis ranging from a sore back to a stroke. Some of the more fanciful tales involve a staged car crash as part of a political feud, although no evidence has been offered to back that up.

The 59-year-old Xi is China’s vice president and was picked five years ago to succeed President Hu Jintao. Xi is due to take over as head of the ruling Communist Party at a congress later this year, although no date for it has been announced yet.

Xi’s last public appearance was at the opening of the Communist Party training academy’s fall session on Sept. 1. Since then, he has canceled meetings with U.S. Secretary of State Hillary Clinton, Singaporean Prime Minister Lee Hsien Loong and Danish Prime Minister Helle Thorning-Schmidt. On Sunday, he also missed an emergency meeting of the Central Military Commission, of which he is a vice chairman, called to discuss earthquake recovery work.

The mystery surrounding Xi is the latest in a string of unforeseen incidents that have threatened to derail the leadership’s plans for a smooth handover of power to younger officials. Those began with the spectacular downfall of high-profile populist politician Bo Xilai and the unexplained reassignment of a top aide to Hu earlier this month.