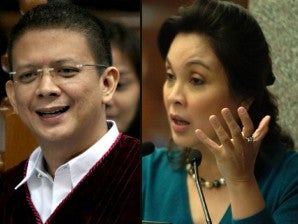 LP stalwart and Budget Secretary Florencio Abad on Monday confirmed this to the INQUIRER, a day after President Aquino gave a sneak peek on the senatorial candidates of the LP-led administration coalition.

“Certainly, they are in the short list and both are shoo-ins should they finally decide to join the administration coalition,” said Abad, when contacted by phone.

During a briefing with reporters Saturday night in Vladivostok, Russia, where he attended the 20th Asia Pacific Economic Cooperation forum, Mr. Aquino disclosed at least six names that would end up in the slate:

According to the President, the LP has yet to decide whether to field the son (Customs Chief Rufino Biazon) or the father (former Senator and Muntinlupa Rep. Rodolfo Biazon).

But when he was asked about Escudero, who remains independent after he bolted the Nationalist People’s Coalition, the President said: “Next question.”

He had earlier indicated his preference to running under LP, but Escudero and Legarda, an NPC stalwart, are also being wooed by the rival United Nationalist Alliance.

Abad had earlier revealed that the administration already had 13 possible candidates, but when asked whether the list had been trimmed down, he said:

“We’re also awaiting the Commission on Elections’ response to Senator Franklin Drilon’s proposal to open 13th slot for No. 13 in case Sen. Miriam Santiago decides to accept the ICC post, after the Certificates of Canvass are filled,” said Abad.

Santiago has deferred her assumption of a post on the International Criminal Court, prompting Comelec chairman Sixto Brillantes Jr. to ask Santiago to immediately notify the commission once she has decided to leave the Senate for the ICC.

Santiago’s decision is crucial so that the Comelec could determine if the ballots to be printed for the 2013 senatorial race would have 12 or 13 slots.

The poll body is ready to make the necessary adjustments in the precinct count optical machines (PCOS) if the Senate declares a vacancy once Santiago leaves.